Hello and welcome to my entry for Sunday Stamps.  I did not participate last week as I only had a stamp of a spider, which our hostess does not like.

Anyway, onto endangered species.  I have shared this stamp before but it is very appropriate for today. 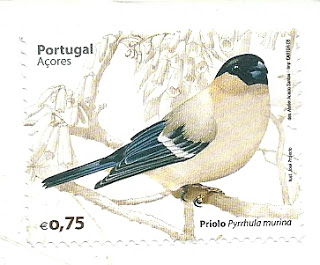 As I wrote a few years ago:

This is a pretty bird with a sad story behind it. This is the Azores bullfinch.  Its species name is Pyrrhula murina, and it is endemic (meaning it is found only there) to the islands of the Azores, a small archipelago of islands in the North Atlantic that belong to Portugal.

Not only that, it is endemic to one island only, São Miguel  Island.

Not only that, it is found only in the forests of the mountains in the eastern part of the island.

It likes the native laurel forests, and it is threatened by deforestation and the growth of non-native species.

Visit Seeitonapostcard to see who else is playing!

Hello and welcome to my postcard blog.  My quilt blog is at Viridian's blog.

The theme for this week set by our hostess is the letter M.  She showed a stamp from Monaco and I will do the same: 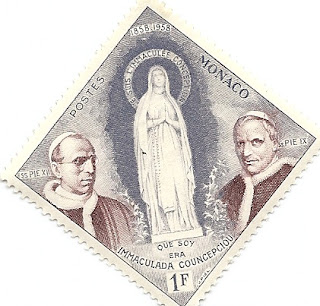 A stamp from Monaco, honoring the 100th anniversary of the dogma of the Immaculate conception of Mary, mother of Jesus. (So I thought.)  From Wikipedia: "The Immaculate Conception was solemnly defined as a dogma by Pope Pius IX in his constitution Ineffabilis Deus on 8 December 1854. The Catholic Church teaches that the dogma is supported by Scripture (e.g., Mary's being greeted by the Angel Gabriel as "full of grace") as well as either directly or indirectly by the writings of Church Fathers such as Irenaeus of Lyons and Ambrose of Milan.  Catholic theology maintains that since Jesus became incarnate of the Virgin Mary, it was fitting that she be completely free of sin for expressing her fiat."

Though actually 1858 is the year of the appearance of the Virgin Mary at Lourdes, as I found out from the commenters the first time I shared this stamp.

Good day and welcome to my postcard blog.  The Tokyo Olympics are closing today, and our hostess for Sunday stamps has asked us to share stamps of Japan, or of the Olympics.

I have a stamp from Postcrossing days, from 2012: 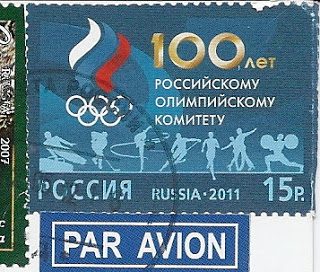 From a Russian postcrosser, I believe this stamp commemorates the 100 year anniversary of the Russian Olympic Committee, though I cannot read the Cyrillic letters.  I have shared this stamp before, back in 2012!

Good day and welcome to my blog.  I am back from vacation, and ready again to participate in Sunday stamps.  Below is a postcard I received via Postcrossing in 2012.  But the postcard used is older than that:

Note the CCCP symbol (and hammer and sickle) on the right!

Our hostess will be glad to see I found a stamp featuring lace, as she did for today.