It's Sunday morning so it must be time to check out Sunday Stamps at See it on a Postcard. 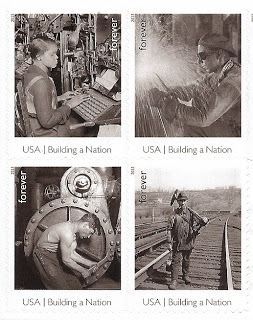 I last showed these stamps in 2013 at the cusp of a Government shutdown. As I said then:


This is a group of four stamps from a larger set.  Most of the photographs were taken by Lewis Hine, a famous photographer.  According to Wikipedia, "Lewis Wickes Hine (September 26, 1874 – November 3, 1940) was an American sociologist and photographer. Hine used his camera as a tool for social reform. His photographs were instrumental in changing the child labor laws in the United States."
More images can be found at http://www.loc.gov/pictures/collection/nclc/.

More industry and technology can be found at See it on a Postcard.

viridian
Posted by viridian at 9:10 AM 6 comments:

This week's theme at See it on a Postcard is one of my favorites - Rocks and Minerals! 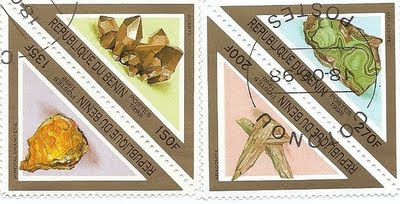 From the left: Uranium ore, quartz, aragonite, and malachite, on stamps from Benin.  I last showed these stamps in August of 2011.

Visit See it on a Postcard this week to see who else is playing!