Sunday Stamps is up to the Letter D, and sharing a stamp from a country whose name begins with D.  I decided to go back to the US Postal Service and see what I could find.  I found a stamp commemorating a festival I am unfamiliar with, and hey, it's coming up this fall. 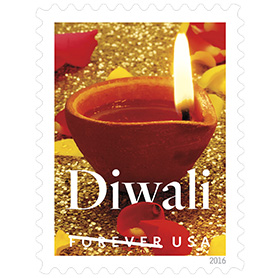 From the US Postal Service:
"In 2016, the U.S. Postal Service® commemorates the joyous festival of Diwali, which is also known as Deepavali. One of the most important annual Hindu events, the holiday celebrates the triumph of good over evil. Spanning five days each autumn, it is considered by some to be the start of the new year.

Diwali is a shortened version of the Sanskrit word Deepavali, which roughly translates as “a necklace of lights.” During Diwali flickering oil-wick lamps called diyas dot the homes of observers around the world. The stamp features a traditional diya against a background of glimmering gold and flower petals.  The meaning of Diwali often depends on regional identity on the Indian subcontinent."

Sunday Stamps is now up to the letter B.

I admit I searched the US Postal Service website first,  and found this great series of round stamps: 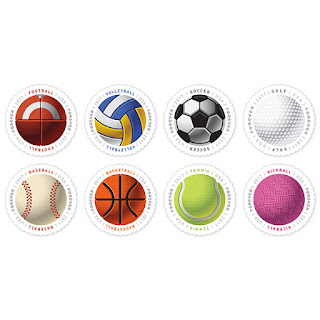 All sorts of Balls!  Football, Volleyball, soccer ball (for us in the USA),  golf ball,
and baseball, basketball, tennis ball, and playground ball (though I remember ours in red, not pink).  These stamps are for 1st class USA postage, not international.

I am joining in with a stamp featuring pottery from a Native American pueblo, the Acoma pueblo: 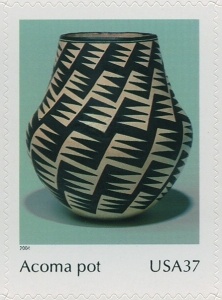 This is from a set from a few years ago.  This is one of my favorite styles of Southwest pottery; I love the black and white patterns that are used.

I will probably check this series again at the end, for (I hope) a Zuni pueblo pot.