Theme this week: Stamps with a story - of how they came to you, or your purchase of them, or of the correspondence that sent them to you. I'll start.

One summer I was traveling Europe with a boyfriend, starting in Scotland at the wedding of a good friend and eventually ending up in Frankfurt, Germany for our return flight to the USA. Renting a car in Germany, we cruised through the Black Forest and on to Switzerland, seeing sites of touristic and geological interest.


Looking at the map, we noticed we really weren't that far from Liechtenstein. 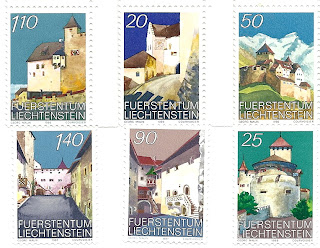 I should point out that I was traveling with the stamp-collecting boyfriend I have mentioned before.  Normally, American tourists don't even know this country exists.

We however, detoured for an hour to stop in Liechtenstein's main town's post office to buy stamps - and then took off again, back to Switzerland.  After not seeing Jungfrau (totally clouded over and rainy) it was back to Zurich.  So, not much of a story, but a memory of a roadtrip just to buy stamps from an obscure country.

Looking forward to your stories,  Viridian

Today's theme is anything you wish. So often people put up stamps that are so interesting, when the theme is open. So blog away! 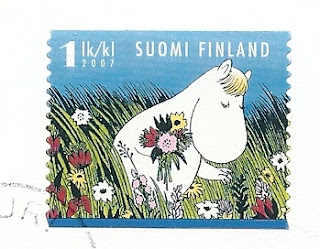 Today I am sharing a Moomin stamp from Finland.  It came to me on a recent Postcrossing card.   I am not entirely sure of the appeal of these creatures, but they apparently have a wide international following.
Theme next week: Stamps with a story - of how they came to you, or your purchase of them, or of the correspondence that they sent to you.  You'll see an example when I post next week.
Link in your blog entry below following the instructions, and visit some other blogs.
Viridian
Posted by viridian at 6:25 PM 8 comments:

Our theme today is birds.  I have a stamp from the country of Portugal.

This is a pretty bird with a sad story behind it. This is the Azores bullfinch.  Its species name is Pyrrhula murina, and it is endemic (meaning it is found only there) to the islands of the Azores, a small archepelago of islands in the North Atlantic that belong to Portugal.

Not only that, it is endemic to one island only, São Miguel  Island.

Not only that, it is found only in the forests of the mountains in the eastern part of the island.

It likes the native laurel forests, and it is threatened by deforestation and the growth of non-native species.

Edited to add: Theme next week: Anything you wish.

It's after Independence Day, that glorious time of hot sun, orange day lilies, Queen Anne's lace, and no ads for school supplies.  A few weeks that feels timeless.


This postcard from a USA postcrosser, of a Tiffany window, captures this feeling perfectly.

I am joining Beth at the Best Hearts are Crunchy for Postcard Friendship Friday.

I hope you will join me for Sunday Stamps, which will open Saturday evening USA time.  Theme: birds.  Check this blog tomorrow.

I am back! Vacations are relaxing for everyone except Mom ( and often Dad) who still have to cook, clean, pack, drive and all that.  I am just back at home today.

I am left without any vintage US stamps and must 'borrow' images from the US Postal Service website.  According to the stamp web page, these se-tenant stamps were issued Dec. 1, 2010.
"On December 1, 2010, in Washington, DC, the Postal Service™ issued a First–Class Mail® Lady Liberty/Flag Forever se-tenant pair (two designs) in a Roll of 100 stamps, designed by Terrence McCaffrey, USPS®.
The U.S. Postal Service® introduced two new First–Class Mail Forever® stamps featuring photographs of world–recognized symbols of the United States: the Statue of Liberty and the American flag. The photograph of Lady Liberty is by Raimund Linke and the U.S. Flag photograph is by Ron Watts.
The stamps were issued in a Roll format and known as Lady Liberty and U.S. Flag. Forever stamps are always equal in value to the current First–Class Mail 1–ounce rate."

Ah, but there is a problem, which a keen-eyed fan noticed.  From the MSNBC news story:
"A stamp that was supposed to show the Statue of Liberty actually features a replica outside a Las Vegas casino, The New York Times reported Friday.
The United States Postal Service admitted the mistake but said it planned to stick with its Lady Liberty "Forever" stamp.

"We still love the stamp design and would have selected this photograph anyway," Roy Betts, a post office spokesman, told the Times.
However, he added the Post Office regretted the error and was "re-examining our processes to prevent this situation from happening in the future."
The Times said the image was taken from a photography service, but a "super-fan" of the statue spotted subtle differences and contacted Linn's Stamp News, which first ran the story."

I wonder what the moral of the story is?

Share with us your patriotic stamps from you country or any country.