It is Saturday night, and as I am sure you know, the USA government shutdown ended earlier this week. At the last second the government also avoided sending the world economy into a tailspin. However, this may all start over again in a few months.

Well, we can enjoy sharing some stamps this Sunday.  This week's theme is anything you wish.  In my opinion, there can never be enough stamps of birds.

The bird on the left is known as the Japanese white eye or mejiro.  It is native to many areas in east Asia.   The bird on the right is The Black-crowned Night Heron (Nycticorax nycticorax), commonly abbreviated to just Night Heron in Eurasia, is a medium-sized heron found throughout a large part of the world,  according to Wikipedia.  Both these stamps are from South Korea.

I hope you will join me with any stamp you wish this week.  Go crazy if you wish!

No Sunday Stamps next week as I am away at a big and busy professional meeting.
We'll start again on November 3, with the theme the Arctic and Antarctic.

It's Saturday, Day 12 of the USA government shutdown.  I  was sure that the politicians would come to an agreement before this.  For those keeping track, my daughter's field trip to Washington DC was postponed to the first week in June.  Hopefully everything will be back to normal by then!!

Our theme this week is cars.  My contribution is a recent offering from the US Postal Service (still delivering despite the shutdown). 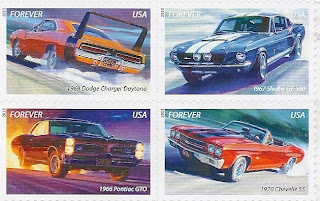 These are four "muscle" cars, as they were and are called, beloved of young men then and now.  Clockwise from the top left: the 1969 Dodge Charger Daytona, the 1967 Shelby GT-500, the 1970 Chevelle SS, and the 1966 Pontiac GTO.  All had huge engines with very high horsepower, especially by today's standards.
Please join me this week with any car or cars you wish.
Viridian
Theme next week: Open, anything you wish.
Posted by viridian at 4:23 PM 11 comments:

Is it Saturday again? How did that happen?  This week went by so fast!

This week will also be known as the start of the USA government shutdown, which started Oct. 1 2013.  I do hope it is resolved soon.  Even our family is affected.  My daughter has an eighth-grade field trip to Washington DC October 11 - 14 - except the Smithsonian, Mount Vernon, and various monuments will be closed.  Apparently the plan is to go anyway, and look at the monuments from afar.  They will still be able to enter Arlington National Cemetery, though the visitor's center is closed.

Anyway, no politics on this blog, just postcards and stamps.  Yes, it's time for Sunday Stamps.

Out theme this week is Industry, interpreted broadly.  I was thinking of the following stamps, issued recently by the US Postal Service. 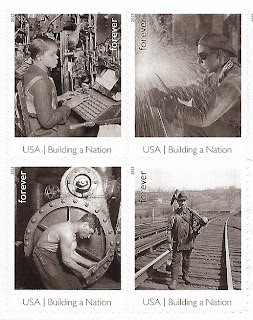 This is a group of four stamps from a larger set.  Most of the photographs were taken by Lewis Hine, a famous photographer.  According to Wikipedia, "Lewis Wickes Hine (September 26, 1874 – November 3, 1940) was an American sociologist and photographer. Hine used his camera as a tool for social reform. His photographs were instrumental in changing the child labor laws in the United States."
More images can be found at http://www.loc.gov/pictures/collection/nclc/.
And wouldn't you know, last week I received a postcard from Thailand, with the following stamps on it:

I hope you will interpret this theme broadly and creatively!  Join in below.