It's time for Sunday Stamps, and the theme is:

I had several things in mind, but then a Postcrossing card arrived in my mailbox. It is from the Ukraine and came in an envelope decorated with all sorts of interesting stamps.

From the left: A peasant couple, perhaps with  the goose that lays golden eggs; a castle or fortress; a scene of a couple jumping a fire, which is not a stamp at all, but is attached to the stamp of the windmill beside it.  Below: leaves and nut of tree that sure looks familar but I can't place the name.

A busy Spring weekend, with the end of the semester upon me!  Enjoy the free theme this week.

Theme next week: Stamps from China, or Taiwan.  I've recently received interesting stamps from both places.

It's Dancing on the Moon time at Sepia Saturday.

And if you are on the Moon, you might leave some boot prints. 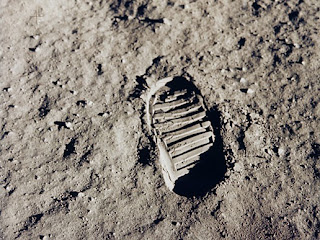 One of the first steps taken on the Moon, this is an image of Buzz Aldrin's bootprint from the Apollo 11 mission. Neil Armstrong and Buzz Aldrin walked on the Moon on July 20, 1969. Photo Credit: NASA.

Goodness, another week has gone by, and what a week. Thankfully, no one I know was in jeopardy. My thoughts go out to those in Boston and nearby who are hurting.

Our theme this week:  Earth Day and other April Celebrations.

I was thinking of Earth Day, myself.  The first Earth Day was April 22, 1970.  However, the stamps I have celebrate an important woman who started a beautification campaign in the USA even before Earth Day. 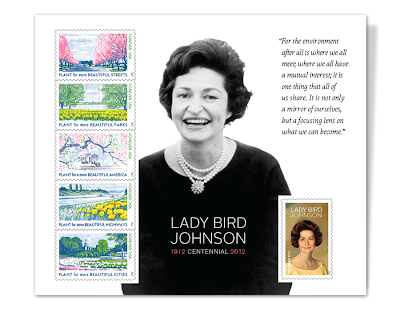 (Scan from the US Postal Service)
"The sheet features six stamps, a new stamp which reproduces the official White House portrait of the First Lady painted in 1968, and adaptations of five stamps issued in the 1960s that encouraged participation in the President and Mrs. Johnson's campaign, “Plant for a More Beautiful America.” Also included is a quote from Mrs. Johnson reflecting her belief that the environment is our common ground and a black-and-white image of the First Lady taken from a family photograph shot in 1963 by Yoichi Okamoto.

I hope you will be able to join me this week.  Then, as we need a break,
Theme next week:  Anything you wish.
Viridian

It's Saturday, and time to open up Sunday stamps a bit early, for friends in Asia and Europe.

Theme this week: Lighthouses, or other public structures.

I received the following stamp on a card from Germany, and I suspect there is a series of lighthouse stamps. 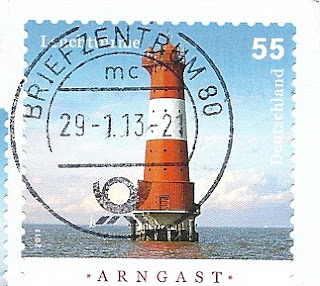 But Lighthouse stamps may be hard to find, so please interpret this theme broadly.

It has finally warmed up in the American Midwest!  Trees and bushes are budding like crazy, trying to catch up with the season.

Theme next week: Earth Day and other April Celebrations.

It's Spring in the Northern Hemisphere!  There are New Year celebrations in some parts of the world; it's National Poetry Month; World Health Day, St. George's Day.... Many other remembrances fall in April.  This Wikipedia link may help.  I know we just had Geology and the Environment as a theme, but I didn't want to let Earth Day pass without notice.  Be creative!

Oh my, I have been looking forward to this week's Sunday Stamps.

As some of you have deduced, I love this topic!  Imagine my excitment recently upon receiving a card from the Ukraine, and turning it over to find: 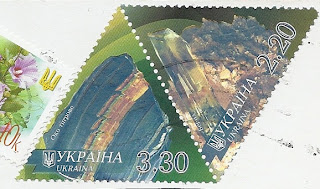 Stamps of tiger-eye and Beryl (I think).  The stamps appear iridescent and have that 3-D look to them, which the scan cannot capture.  Marvelous!  And triangular too!  Join me this week, and don't be afraid to interpret this theme broadly.

Theme next week:  Lighthouses, or other public structures.