In which we are noting the passing of the old year, and anticipating the new.

Theme this week:
Anything you wish, and a challenge: can you find a stamp commemorating the end of something? It is the end of the year after all.

I thought at the time I would have nothing, but there it was, on the US Postal Service website. 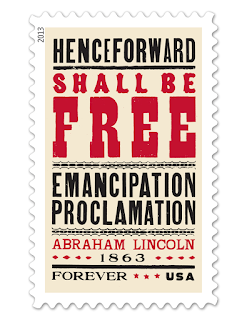 From Wikipedia:  "The Emancipation Proclamation is an order issued to all segments of the Executive branch (including the Army and Navy) of the United States by President Abraham Lincoln on January 1, 1863, during the American Civil War. It was based on the president's constitutional authority as commander in chief of the armed forces; it was not a law passed by Congress. It proclaimed all those enslaved in Confederate territory to be forever free, and ordered the Army (and all segments of the Executive branch) to treat as free all those enslaved in ten states that were still in rebellion, thus applying to 3.1 million of the 4 million slaves in the U.S. The Proclamation could not be enforced in areas still under rebellion, but as the army took control of Confederate regions, the slaves in those regions were emancipated rather than returned to their masters. From 20,000 to 50,000 former slaves in regions where rebellion had already been subdued were immediately emancipated, and over 3 million more were emancipated as the Union army advanced. "


The 13th Amendment to the US Constitution ended slavery legally.

Wow.  Looking forward to what you have found this week.  Remember, feel free to post any stamp you wish if you cannot follow this theme.

I am readying this post at an internet cafe, as I am at my parents on vacation (they have no internet).  It will be published automatically.  It may be a day or two before I am able to visit your blogs however.

Theme next week: Black stamps, or black items on stamps.

I am joining up with Beth at the Best Hearts are Crunchy this week with a  Holiday card. 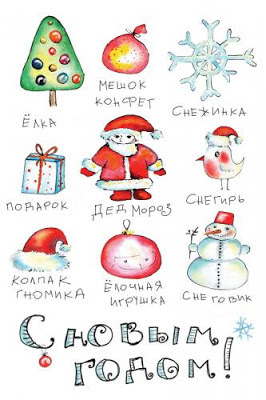 I have some idea of what the words say, but not exactly, as it's in Russian!
Hope you are having a wonderful holiday week!
Viridian
Posted by viridian at 1:59 PM 3 comments:

Merry Christmas and Happy Holidays everyone! It is time for Sunday Stamps #102.

I am a little late today because I have been at a family get together: 3 generations together, dinner and supper and opening presents in between.  It ran rather late!  It was very fun for all involved however.

Our theme this week is more holiday or Christmas stamps.  Last week some people shared more than one stamp - I hope you have a few different kinds left!  I have two from the US Postal Service, and I am using their scans, still too lazy to scan my own. 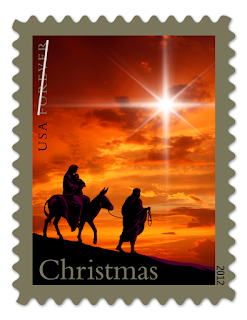 The Holy Family, leaving Bethlehem or traveling to Egypt, one assumes, and 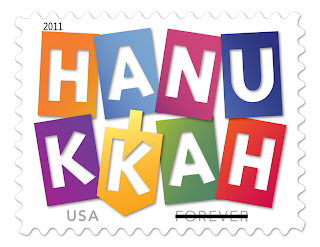 A stamp celebrating the Festival of Lights, Hanukah.  Though the double K on the stamp seems a bit strange, doesn't it.

So the world did not end on Dec. 21, as some silly people in the USA thought it might.  Therefore we have Sunday Stamps this week, and for next week:

Next week's theme:  Anything you wish, and a challenge: can you find a stamp commemorating the end of something?  It is the end of the year after all.

Remember: I am on Facebook, (Viridian61) where I announce when these posts are available - find it out first there!

It's week 101 and time, now that it is December, for some Christmas or Holiday stamps. I am sharing the secular stamps issued this year by the US Postal Service (they also issue religious stamps). 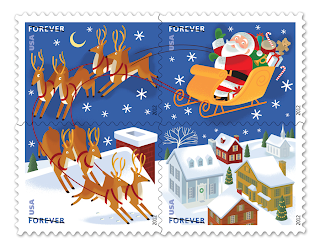 I have these stamps for my Christmas cards, but I am too lazy to scan them - so this is the USPS scan.  Santa and his sleigh and reindeer cruise over housetops on a snowy night.  I don't think there is much snow forecast for the USA - this December has been warmer than usual.

It's been a busy yet sad Saturday at chez Viridian.  I have the normal household things to do, but over everything hangs the sadness of the shootings at Newtown CT.  When will the gun violence and our obsession with guns end?  I worry for my own 3 children. Oh well, enough opining for now.

Theme next week:  More Christmas/Holiday stamps!  I bet you have a few.

I am joining up with Beth for Postcard Friendship Friday, very late indeed. 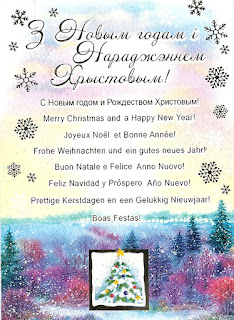 This is a Christmas postcard I recently received from a Postcrosser in Belarus.  What you can't see is the card is embossed with silver (does not scan well) and the stamp on the reverse has silver on it too.

Here in the midwest USA it is quite a bit warmer than usual.  It's hard to expect snow when the temperature rarely drops below freezing.

Viridian
Posted by viridian at 7:13 AM 2 comments:

Hurrah!  We have made it this far!  It's the December 9 2012 edition of Sunday Stamps and I made this far with just a week or two off and a few bumps along the way.

I had thought of having a giveaway in honor of this auspicious event.  But what?  I thought of specialty US postage, but with my international audience, who could use it except me and Postcardy, and maybe a few lurkers?  So I am sorry to say there is nothing special on offer, but I hope you will enjoy my contributions today.

First, a stamp and surrounding printed material from a Postcrosser in Russia. 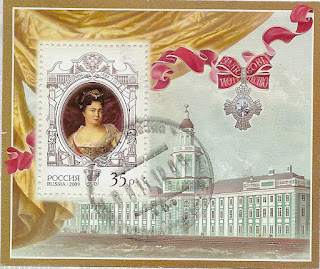 This is a stamp of Catherine I.  Wow!  It filled up most of the postcard!  Thank you Lili for sending this from St. Petersburg.

The next item came from China.  It is postage preprinted on a very large envelope, and a Postcrossing postcard was inside.  I scanned just the stamp, not the whole envelope, which was decorated with a mountain landscape. 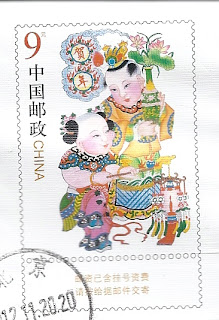 Holy Cow, we are almost there!  Almost to week 100.  I cannot believe I have been doing this so long, and with only a hiccup or two.

Anyway, this week's theme:   stamps with a message. For example, in the USA what we would call a PSA or Public Service Announcement, such as "Stop Smoking", etc. What are they called in your country?

There has been a series in the USA of "Go Green" stamps.  However, what made me think of this theme is the stamp below. 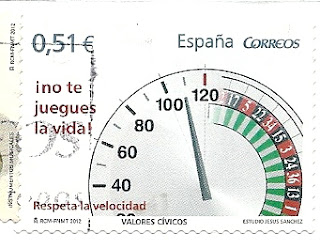 I believe this stamp is saying not to make a game out of your life? Not to take a chance with your life? Can you correct me?  It's definitely asking people to obey the speed limit.  I like the design of the speedometer morphing into a gaming wheel.

Next week:  It's week #100!  Hurrah!  Let's share some totally awesome, amazing stamps or stamp sets, mini-sheets, anything you wish.  I've got to go through my collection and find something special!
For week 101, we'll do Christmas/holiday stamps.