In which our theme is anything you wish, as I couldn't think of a theme. 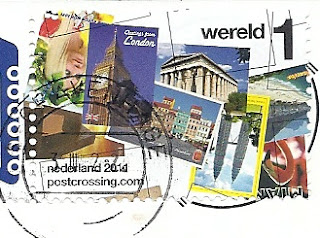 So I am sharing with you one of the Postcrossing stamps issued by The Netherlands.  Yes there are others!  I just received a different one on a postcard.

I just love Postcrossing.  I have been a member since April 2008.  You sign up, and request addresses of persons (complete strangers) to send postcards to.  After they arrive and are registered, your name and address go in the queue so that someone can send a postcard to you.  And then repeat.  Most of the newer stamps you see on this blog arrived via Postcrossing postcards.  I have sent (and received) more than 1000 postcards!

Thank you everyone who suggested future themes for Sunday Stamps.  Whatever the theme is, I encourage you to stretch the theme!  Even post a stamp that doesn't follow the theme!  That's fine with me. I will be using some of the themes shortly.

Theme next week: Architecture.  This could be a church or a municipal building, a historic site, or folk architecture (think: cottages).  Even an archeological site.  Or a stamp showing an architectural detail.

This week's theme is flowers, or Spring. 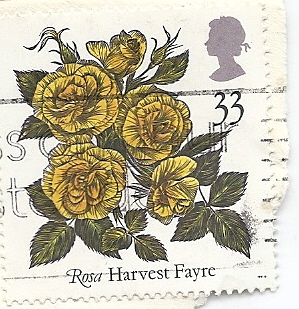 Here are some roses from Great Britain.  This is an older stamp that had been hiding in my desk drawer at work.  But I do not how old this stamp is.
Spring is going strong here in the Midwest! Four days of well above average temperatures has made the trees and bushes bud, and then burst open with new little leaves.
If you use Facebook, you can follow me there at http://www.facebook.com/pages/Viridian61/347674418583948.
Now I ask for your help.  I am running low on ideas for themes for Sunday Stamps.  April is  National Poetry month, so there is one theme.  But do you have some suggestions for future themes, ones where people in different parts of the world will be able to find a related stamp?  What have I overlooked?
So, as you can guess, the theme for next week is anything you wish!
Viridian
Posted by viridian at 5:45 PM 13 comments:

This week's theme: anything you wish. I had a stamp picked out for this but then a postcard from Russia arrived this week.

This was sent from a 6 year old boy who is learning a lot about geography, I am sure.  He or his parents found an old, circa 1982 postcard (from the copyright date).  And note the hammer and sickle CCCP (USSR) mark in the corner!  Thank you for not covering this with a stamp - it really takes me back.

Of course the other gem here is the triangular stamp of lace.  I like all sorts of textiles, especially quilting so it really brightened my date to receive this card.

Please join me with any stamp you wish - it doesn't have to be from Russia, or triangular, or of a textile :-).

Theme next week: Spring or flowers.

This week's Sepia Saturday theme is scouting, semaphores, groups of young men, etc. I don't have scouts or semaphores. I have today a photograph of a music class at a boy's school in the American Midwest. 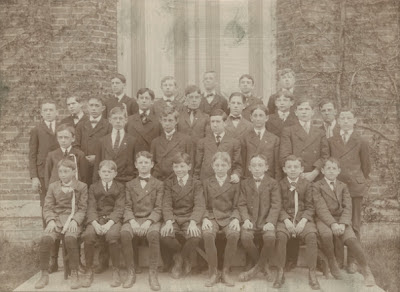 This is from the archives of the University where I work.  In the interest of my personal privacy I am not going to divulge my source.  That sounds so secretive doesn't it.
This photo was taken between 1905 and 1912, according to the archives.  They are not playing music at the moment but are posing for their class picture.  I'm glad my University is preserving its heritage and digitizing much of it.
Happy Sepia Saturday!
Andrea
Posted by viridian at 8:08 PM 10 comments:

In which our theme today is famous women, women's rights, International Women's Day, etc.  My stamp for today comes from the US Postal Service website, and is of Anna Julia Cooper. 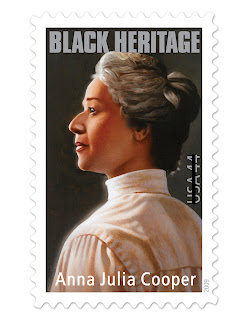 According to the USPS website, "With the 32nd stamp in its Black Heritage series, the U.S. Postal Service® honors Anna Julia Cooper, an educator, scholar, feminist, and activist who gave voice to the African–American community during the 19th and 20th centuries, from the end of slavery to the beginning of the Civil Rights movement."

According to Wikipedia she was born a slave in 1858 in Raleigh North Carolina.  She became a teacher, a speaker, an author, and earned a Ph.D. from the Sorbonne in Paris.  "Cooper completed her first book, A Voice from the South: By A Woman from the South, published in 1892. It was her only published work, although she delivered many speeches calling for Civil rights and woman's rights.  Perhaps her most well-known volume of writing, A Voice from the South is widely viewed as one of the first articulations of Black feminism."

Part of her legacy (again, from Wikipedia)  is that pages 26 and 27 of every new United States passport contain the following quotation: "The cause of freedom is not the cause of a race or a sect, a party or a class - it is the cause of humankind, the very birthright of humanity." - Anna Julia Cooper

Theme next week: Anything you wish.
Viridian 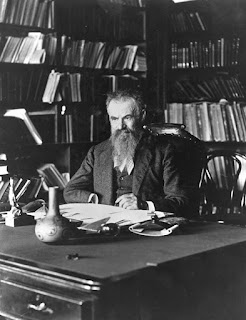 The prompt for this week's Sepia Saturday is Hair, and shows a man with a fine full beard, American painter William Morris Hunt.  The photo made me think of the gentleman above, who you won't recognize, so let me explain.

Long time readers of this blog know I like all things geology and this man is geological.  He is John Wesley Powell, soldier, geologist, second Director of the US Geological Survey, and leader of the Powell expedition, which made the first known passage of the Grand Canyon by boat. According to Wikipedia, "He was director of the Bureau of Ethnology at the Smithsonian Institution, where he supported linguistic and sociological research and publications."  This was later is life, and when I think this photo was taken.

The first passage of the Grand Canyon was made in 1869. He later went back in 1871-1872, this time with photographer J.K. Hilliers (imagine the conditions! with glass plate negatives!). They made the river run again, this time chronicling the journey in photographs. 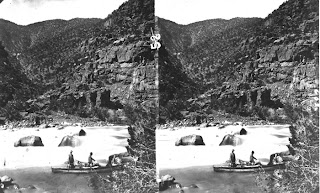 My source for these photos: US Geological Survey Photo Library.

The theme this Sunday is Streetcars or any kind of public transportation.  Feel free to interpret this theme widely.  Here is my stamp:

An older stamp from our friends in Finland, showing a green streetcar and lovely birch trees.  I do not think the USA has put streetcars on stamps, but maybe someone can prove me wrong. 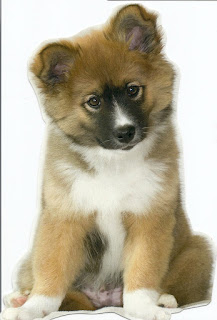 Happy Postcard Friendship Friday!  This is a shaped postcard from a Postcrosser in Finland, of one of the most adorable puppies I have ever seen!  I want to take him home, even though he looks like he'll grow into a very large dog!

I am joining up with beth at the Best Hearts are Crunchy.