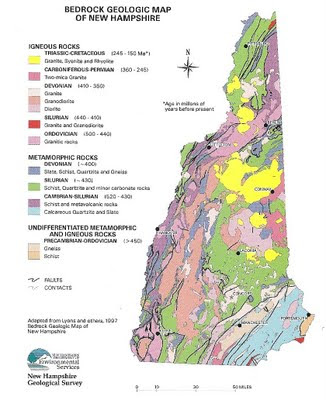 Staying in the east, following Massachusetts geology (see older post). Just to the north of Massachusetts, New Hampshire is known as the Granite State, and with good reason. Much of the northern portion of the state is underlain by igneous rocks, especially granite. To the south, the blue, purple and green hues indicate various metamorphic rocks, but look a those big blobs of yellow and pink. Those are the igneous rocks. Magma pooled underground long ago and slowly solidified, forming large crystals of different minerals. It could look like this:

New Hampshire's emblem is the Old Man of the Mountain. Formed out of a series of rock ledges, projecting out over a valley, viewed from a certain angle it looked like a craggy face. Until May 2003, that is. The rock ledges had been weakened by erosion and part of the face broke off. This New Hampshire website has more information and photos.
Happy PFF and Happy Geology!
See Marie's website for more postcards!
Posted by viridian at 8:23 AM 5 comments:

Well, we'll see how this social networking thing works out. Maybe this middle aged lady can catch up with the young ones. You can follow my twittering at viridian61.
Posted by viridian at 10:55 AM No comments: 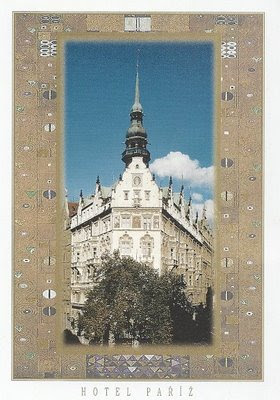 viridian
Posted by viridian at 9:29 AM 9 comments: 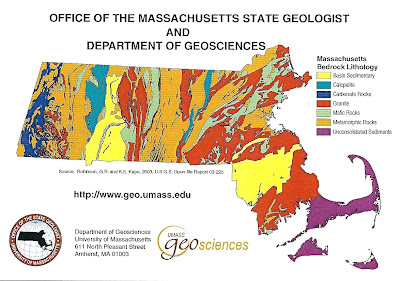 Standard sized postcard. Promotional giveaway for the State Survey. A view of bedrock geology - what is under the surface dirt and gravel. Lots of metamorphic (changed by heat and pressure) rocks in MA! Even the blue and green areas are metamorphic rocks. The bright reds are granite or granite-like rocks. Cape Cod and the islands are in purple. That means they are made of unconsolidated glacial sediments. Given 20 000+ years, they will probably wash away.
I am away for about 8 days so this will be it until I come back. Enjoy.
viridian
Posted by viridian at 9:31 AM No comments: 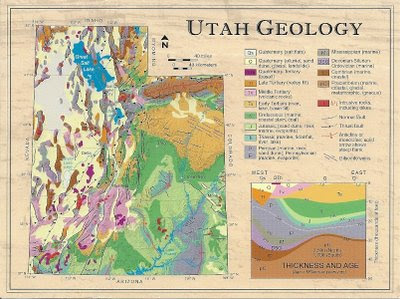 This is an oversized postcard (8 inches by 6 inches) published by the Utah Geological Survey. I really like geology and pick these up when I can. When I send them through Postcrossing, the recipients just love them.

On the left is a geological map of Utah. Each color represents different rock that is exposed at the surface, or near the surface, just covered by soil. Without an explanation the colors mean very little so there is a key in the upper right. Here, different colors represent rocks of different ages. Yes, there is standard color scheme! Yellows are most recent rocks, or sediments recently deposited by rivers. Greens and aqua are Mesozoic rocks (time of the dinosaurs). Blue, gray-blue to brown colors are the older rocks (Paleozoic). Igneous rocks of what ever age get their own bright colors: reds, pinks, magenta. They really liven up a geologic map!

The lower right contains a cross section, as if you cut through the ground, took half away, and saw what was inside. Older rocks are on the bottom, younger on the top, as you might expect.The geology under Utah leads to amazing landscapes. Utah is the home of Bryce and Zion, also Arches National Park and many others. In the north are beautiful mountains and wonderful ski areas.

Happy Postcard Friendship Friday! Check out Marie's site for more.
Posted by viridian at 9:06 AM 19 comments: