We are so close to Christmas!  Sadly it has been raining all day and all our snow is gone here in the Midwest.  And it looks like the warmish weather will continue and no more snow. :-(

Anyway, it's Saturday evening and time for Sunday Stamps.  Our theme this week is fantasy, especially children's fantasy.  I have some fun and yes controversial stamps to share with you.  First, a scan from the stamp booklet: 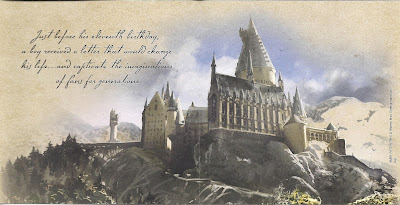 "Just before his eleventh birthday, a boy received a letter that would change his life.... and captivate the imaginations of fans for generations." 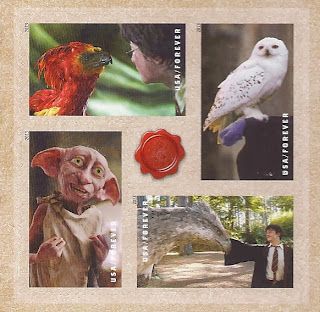 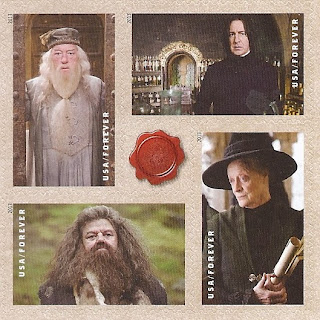 Yes, it is Harry Potter! [a quibble here: Peter Pan has been around for generations, Harry Potter not so much.  Will this series of books be so popular in 100 years?]

I am showing 8 of the 20 different stamps in this booklet. The stamps feature images from the series of movies - from the very first (the kids are so young!) to the most recent.

Now for the controversy.  There is some talk that these stamps are "un-American."  Let me quote from the LA Times:

"Some members of the Citizens’ Stamp Advisory Committee, which for 56 years has researched and recommended subjects for new stamps, are upset after the Postal Service bypassed that panel in its decision to run 100 million Potter stamps, the Washington Post reports.
“Harry Potter is not American. It’s foreign, and it’s so blatantly commercial it’s off the charts,” said John Hotchner, a former president of the American Philatelic Society, who served on the committee for 12 years until 2010. “The Postal Service knows what will sell, but that’s not what stamps ought to be about. Things that don’t sell so well are part of the American story.”
But after declining revenue as Americans switch to the Internet, the USPS “needs to change its focus toward stamps that are more commercial,” Postmaster General Patrick R. Don­ahoe told the Post."

Oh dear.  Well they are issued now and I think they will be popular.

Please join me with your fantastical stamps, of any sort.

Theme next week:  No Sunday Stamps, I am taking the week off.
Theme two weeks from now: Olympics stamps, featuring Sochi or any other Games.

It has been a snowy day here in the American Midwest, and now the snow has turned to rain.  I am afraid it will turn into freezing rain tonight.

I have fixed part of my computer problems: a loose cable connection on the wireless router box.  This makes my life so much happier!

We are at a milestone too: #150!  Thank you Sunday stampers, for joining in each week, and visiting others and leaving a comment.  Now on to the holiday stamps: 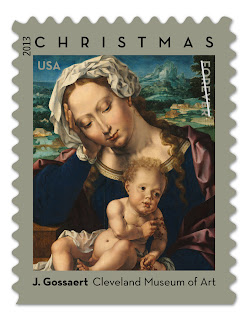 This is one of the Christmas stamps available this year from the US Postal Service.  There always is a Madonna and Child stamp, based on an older painting.
I just received via Postcrossing, a similar stamp from Germany, published in 2006: 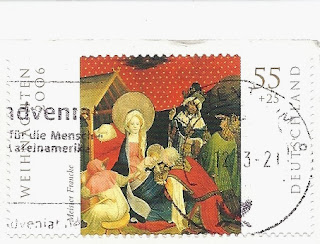 And another stamp, this time from Russia, published in 2011: 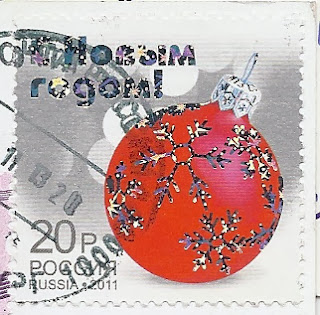 You might not be able to tell from the scan, but the stamp is sparkly!  Please join me with your Holiday stamps - I hope you did not display them all last week!
Theme next week:  Fantasy, including children's fantasy.
Two weeks from now: A week off.  I will be away and unable to post.
Viridian
Posted by viridian at 3:55 PM 9 comments:

Oh the computer problems I have had this week with this home computer!  But there is so much antiviral software on my work computer that I cannot access this blog with it.

Time to take a deep breath, relax, and share some postage stamps of the season. 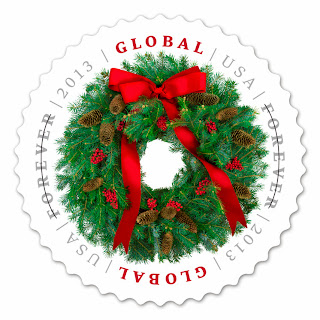 This stamp was recently issued by the US Postal Service and it's legal for international (global) postage.  I purchased a number of these stamps for my Postcrossing cards.  I think it has beautiful detail and is appropriate for the season.
Please join me with any holiday stamp this week.  It does not have to be Christmas, or Christian.
Theme next week: More holiday Stamps.  Let's space these out.
Theme two weeks from now: Fantasy, including children's fantasy.
Viridian
I am done with Linky tools, as they are not working again this week.  We will be using Simply Linked.  The procedure for linking up your post is similar, but please pay attention to the prompts.
Posted by viridian at 6:53 PM 6 comments: