Today I am sharing a stamp from Germany.  It has appeared on my blog before but I'd like to share it again. 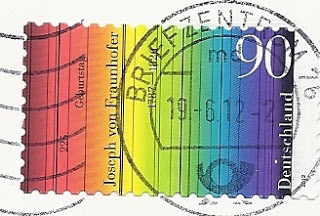 According to Wikipedia, "In physics and optics, the Fraunhofer lines are a set of spectral lines named for the German physicist Joseph von Fraunhofer (1787–1826).  The lines were originally observed as dark features (absorption lines) in the optical spectrum of the Sun. ... About 45 years later Kirchhoff and Bunsen noticed that several Fraunhofer lines coincide with characteristic emission lines identified in the spectra of heated elements.  It was correctly deduced that dark lines in the solar spectrum are caused by absorption by chemical elements in the Solar atmosphere."

Essentially, when there is a ball of hot gas (the Sun) giving off light, and then an area with cool (relatively) gases (hydrogen, oxygen, etc.) the cool gases absorb certain wavelengths of light.  This happens in the outer atmosphere in the Sun.  Lab experiments can help identify these elements.  For example, the thicker line in the red is associated with hydrogen, and the two lines very close together in the yellow are associated with sodium.

Visit SeeeitonaPostcard and see who else is playing today!

Hello and welcome to my infrequent postings to this blog.  My day job started up in late August, and this weekend I am fighting a cold.  No fun. :-(

However I do want to participate in Sunday Stamps, up to the letter E in the tour of the alphabet.  I found this stamp in my work desk, while looking for something else: 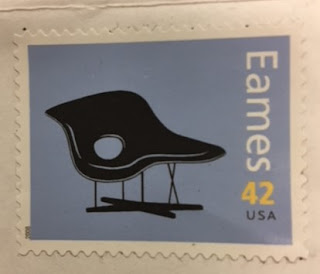 A stamp issued in 2008 celebrating the work of Charles and Ray Eames, a husband and wife design partnership.

According to Wikipedia:
Charles Ormond Eames, Jr. /ˈiːmz/ (1907–1978) and Bernice Alexandra "Ray" Kaiser Eames (1912–1988) were an American design married couple who made significant historical contributions to the development of modern architecture and furniture. Among their most well-known designs is the Eames Lounge Chair. They also worked in the fields of industrial and graphic design, fine art, and film. Ray Kaiser Eames and Charles Eames worked together as creative partners.

Visit SeeitonaPostcard and see who else has joined in!