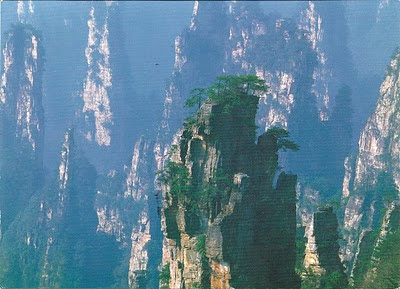 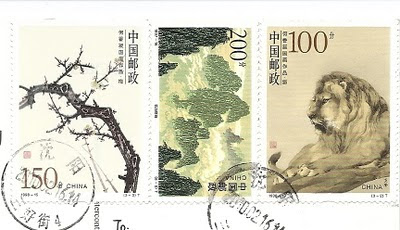 I received a lovely postcard from the city of Shenyang the other day, as part of Postcrossing. It is from Xiuzeng, who wishes me Happy Spring.
It is a geological card, sure to make me happy! A spectacular landscape caused by extreme erosion. Towers of sedimentary material standing tall as the weaker rock has been eroded away. It reminds me a bit of Bryce Canyon, but with somewhat stronger rocks, and more vegetation.
Also note the lovely stamps. A regal lion, a landscape much like the one shown in the postcard, and a wonderful blossoming branch - perhaps almond or cherry blossoms.
I really think the USA has boring stamps - with some exceptions. There are varieties of stamps for first class domestic postage (now 44 cents as I write), but do you want a stamp for overseas airmail? There is only ONE issued stamp for 98 cents. No wonder many European postcrossers ask the Americans to look for different stamps.

I try: 2 44 cent stamps and and a 10 cent stamp. I've gone through the Simpsons, Gary Cooper, the Kelp Forest, classic TV shows, Chinese New Year, famous sailors. Now my post office has very little. I am using the Celebrate! and wedding rings stamps. Better than the forever stamp I suppose.

I hope Marie starts her meme this Friday!
viridian
Posted by viridian at 9:15 PM 12 comments: 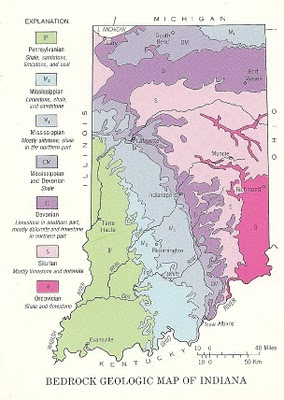 Welcome to Postcard Friendship Friday, hosted by Marie at the French Fractrice.

This week’s geology postcard is the bedrock geology map of Indiana. It is published by the Department of Natural Resources, Indiana Geological Survey at Indiana University, 611 North Walnut Grove, Bloomington In 47405

The state of Indiana is underlain by Paleozoic sedimentary rocks, Ordovician to Pennsylvanian in age. Note that the older rocks are in the east, and younger rocks in the west. These rocks are shale, siltstone, limestone and dolomite, indicating they were deposited in ocean water.

From The Tectonic Features of Indiana webpage:
“The younger sedimentary rocks that were deposited on top of this basement complex were formed in a setting of quiet marine and river waters. Much of this time the craton was covered by a large shallow sea, a so-called "epicratonic sea" (meaning literally "on" the craton). Sometimes land masses or mountain chains rose up on the distant edges of the craton and then eroded down, shedding their sand across Indiana. These sediments whether deposited in rivers or seas eventually compacted into the sedimentary rocks that cover the state today.”

See the bright pink pattern in central Indiana, looking like a tree branch, or perhaps a river valley with tributaries? It is indeed an old river system, the Teays River system. More on this below.

Covering the bedrock in most of Northern Indiana are glacial sediments, laid down by the Ice Ages.

From Freeze Frame: The Ice Age in Indiana by Anthony Fleming:
“As it crossed the landscape this first glacier completely changed the surface drainage that had taken millions of years to develop, damming up river valleys into lakes, diverting stream channels to the south, and in some cases completely filling up large valleys with sediment, leaving little record of their existence. The giant Teays bedrock valley system was one such victim. This valley system was the premier drainage way in eastern North America prior to glaciation, extending from its headwaters in the western mountains of North Carolina and Virginia to the Mississippi River in western Illinois. The gorge-like valley of this river was as much as 200 to 400 feet deep and crossed north-central Indiana between about Berne (Adams County) and Lafayette (Tippecanoe County). Today, there is virtually no trace at the modern land surface of the once giant river—only a deeply buried valley on the bedrock surface defined by various wells and test borings.”

I think I am at the end of my geology postcard series. I have you have enjoyed it. 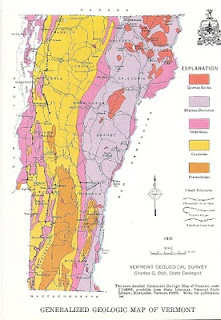 Welcome to Postcard Friendship Friday, hosted by Marie at the French Fractrice.
Frantic digging in my office drawers produced a few more geology postcards. This one is published by the Vermont Geological Survey. The bedrock of Vermont is mostly metamorphic rocks. Here, they have different colors depending on their age, PreCambrian or younger. The red blobs on the eastern side of the state are igneous intrusions, now exposed at the surface. With the swirls, the geology looks rather artistic.
A more detailed PDF of Vermont Geology is at http://www.anr.state.vt.us/DEC/GEO/images/gengeo52.pdf. (The file is over 9 mb in size - it may take a bit to download. Of course, if you want a SERIOUSLY detailed map and cross-sections, just go to http://www.anr.state.vt.us/DEC/GEO/centmap.htm.
Like the other New England states, Vermont has been affected by several mountain-building events in the distant past. However now it has beautiful green mountains and valleys with classic picturesque villages, churches, and farmsteads. To give you an idea, I suggest you look at the photos of John David Geery. I have no affiliation - just found these beautiful photos on the Internet.
And, you probably know that Ben and Jerry's Ice Cream started in Bennington Vermont.
Viridian
Posted by viridian at 11:29 AM 8 comments: