Welcome to Sunday Stamps!Our theme this week is "anything you wish."
I have a stamp - well more than a stamp - that arrived recently on a Postcrossing postcard from South Africa.  It is so amazing. 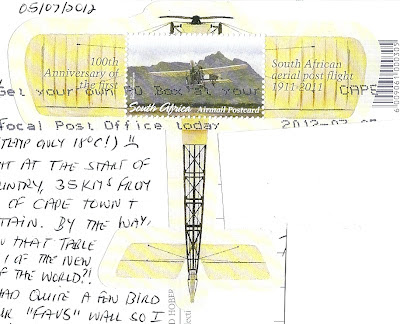 (I covered my address (on the right) for the scan.)  Not only the stamp but the surrounding paper material is here in the center of the postcard!  Is there a special name for the surrounding material?  You can tell I am not a stamp collector.  I just appreciate them very much.

So what do you have this week?  Share anything you wish, esp. a stamp you like that may not fit into a theme.  This is your chance.

Next week: On August 1 I will be starting a contest where you could win some FREE STUFF - so come back and check that out.  It's hush hush until then.

Theme next week (by suggestion):  stamps that leave you wondering: what is this stamp trying to show?  What does it commemorate? Or, who is this person on this stamp anyway? 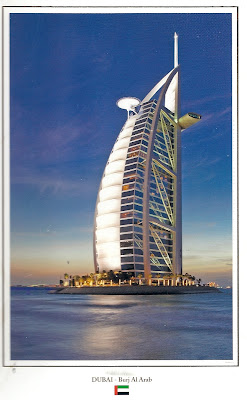 A card from the Dubai in the United Arab Emirates! Not the kind of card you normally get in the mailbox.
This is the Burj Al Arab.  Here is a link to the official website.  A bit out of my price range!

Viridian
Posted by viridian at 9:32 AM 2 comments:

Our theme this week:  stamps for the Olympics (this year or previous years), or featuring a sporting activity. The Games are almost upon us!  Olympic stamps, showing the 5 rings, are harder to find that I initially thought, so please feel free to share a sports stamp.  I was saved by a recent card from a Russian Postcrosser. 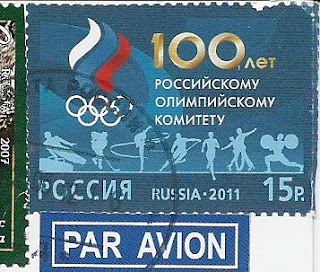 I cannot read the Cyrillic characters, but I'll guess that this stamp commemorates 100 years of the Russian Olympic Committee.  I could be wrong I guess.  It does show the 5 rings of the Olympics.

Join me this Sunday in some sporting activity - or at least anticipating the opening ceremonies.  I hear London will be busier and more crowded than usual.  If that is possible.

Edited to add: theme for next week: Anything you wish. 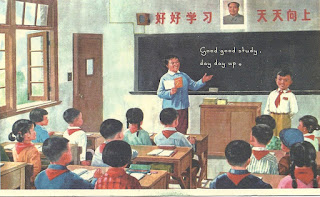 This card is from China and is of a style that reminds me of posters from 1960's China.  I am not sure who chose the English on the chalk board but they need to do some more "good study."

Theme this week:
Isaid: "It's Canada Day, US Independence Day, Bastille Day, and probably other national holidays. Let's share Flag stamps or patriotic stamps, from your country or another country."  I looked for a not so boring stamp showing the USA flag.


And found this one, on a stamp from Japan.  This arrived recently via a Postcrosser.

I do like the cherry blossoms trailing in front of the USA flag.  It reminds me  of the recent set of two stamps issued by the USA showing the cherry blossoms in bloom in Washington DC.  And of course I wanted to include in the scan the stamp that came with it, showing hearts and doves.

Please share your flag stamps and feel free to visit some other interesting blogs this week.

Viridian
Theme next week:  stamps for the Olympics (this year or previous years), or featuring a sporting activity.  The Games are almost upon us!

Today I am joining in (one day late) with Postcard Perfect and their Postcard meme. 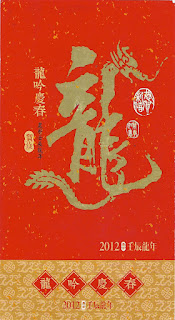 This is from China and celebrates the Year of the Dragon, a very auspicious year.

This week, something a little bit different, a different kind of theme.  Anything, As long as it is YELLOW or partially yellow.  Why not? 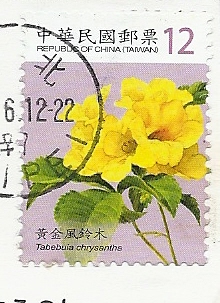 This is the stamp from Taiwan that inspired me.  I just found these yellow flowers to be so happy and cheerful.

And here is another: 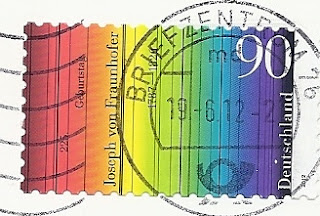 According to Wikipedia, "In physics and optics, the Fraunhofer lines are a set of spectral lines named for the German physicist Joseph von Fraunhofer (1787–1826). The lines were originally observed as dark features (absorption lines) in the optical spectrum of the Sun. ... About 45 years later Kirchhoff and Bunsen noticed that several Fraunhofer lines coincide with characteristic emission lines identified in the spectra of heated elements.  It was correctly deduced that dark lines in the solar spectrum are caused by absorption by chemical elements in the Solar atmosphere."

Essentially, when there is a ball of hot gas (the Sun) giving off light, and then an area with cool (relatively) gases (hydrogen, oxygen, etc.) the cool gases absorb certain wavelengths of light.  This happens in the outer atmosphere in the Sun.  Lab experiments can help identify these elements.  For example, the thicker line in the red is associated with hydrogen, and the two lines very close together in the YELLOW are associated with sodium.

So we can conclude: these elements seen on earth are also in the Sun, and when these lines are seen in the spectra of other stars, we know these elements exist in other stars.  And the star spectra can be used in other research, too much to go into here.

What yellow stamps do you have today?

Theme next week:  It's Canada Day, US Independence Day, Bastille Day, and probably other national holidays.  Let's share Flag stamps or patriotic stamps, from your country or another country.

A postcard from Postcrossing for today: 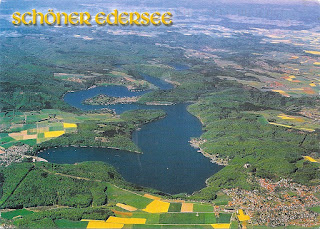 A lovely place in Germany. A vacation spot for the Postcrosser who sent this card to me.