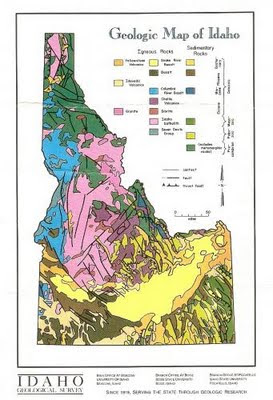 Happy Postcard Friendship Friday, hosted by Marie at the French Fractrice.
I am NOT going out shopping on Black Friday. We are decorating for Christmas. Which has little to do with the state of Idaho, but that is the postcard for today.
This is standard sized postcard, published by the Idaho Geological Survey. After scanning it, I seemed to have misplaced it!
The Geology of Idaho is similar to the states around it - after all, geology does not stop at the state line. The pink color represents a huge intrusion of granite, now exposed at the surface. The green and olive colors represent sedimentary rocks, uplifted during mountain building, just as in Montana, and Nevada. The bright blue represents Columbia River basalts. The broad yellow is another basalt flow. This area has developed good soils for growing potatoes.

Time to go, the kids are fighting. Happy PFF!
Viridian
Posted by viridian at 8:55 AM 7 comments: 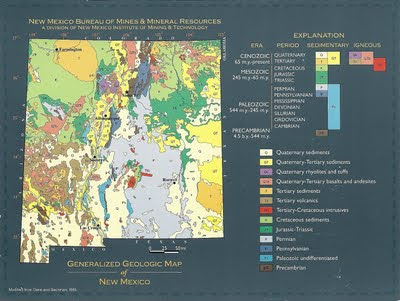 This week I went through my unfiled papers drawer in my office and dug deep and found, yes, more geology postcards! After going through the west of the USA, we'll have to head east again for CT and VT. Anyway...
Welcome to Postcard Friendship Friday, hosted by Marie at the French Fractrice.

This is an oversized postcard (6 by 8 inches) published by the New Mexico Bureau of Mines and Mineral Resources, 801 Leroy Place, Socorro, NM. I have scanned it at a higher resolution than usual so there should be detail visible if you double-click on the image.

The back has a good summation of the general geologic history and so I will quote it here, with my comments in [ and ] brackets.

"The rocks of New Mexico reveal a long and complex of deposition, volcanic eruptions, structural deformation [due to plate tectonics as described in earlier posts], and climatic extremes -- from intensely folded Precambrian cores of mountain ranges more than 600 million years old to black basalts that flowed across the landscape as recently as 900 AD. White sand dunes today move slowly across the world's largest gypsum [a calcium sulfate mineral] desert, where waves of water once broke upon the shores of vanished lakes. New Mexico's extensive mineral and energy resources are a result of this colorful history -- petroleum and natural gas, coal, copper, uranium, gold, silver, molydenum [used for specialty steel] , lead, zinc, barite [a source of barium], fluorite [mined for fluorine, used in industry], gypsum [mined for drywall, aka sheetrock], perlite [see Wikipedia entry] , potash [used in fertilizer], and sand and gravel."
A Virtual Geologic Tour of New Mexico from the Bureau.

Major cities shown on the map are Farmington, Santa Fe (the capital), Albuquerque, Socorro, Las Cruces, and of course, Roswell. 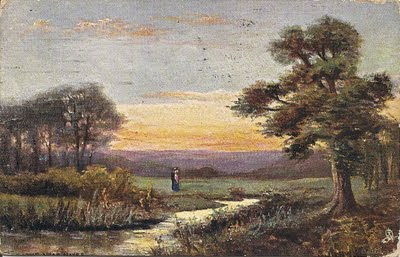 This card is Tuck's card, mailed from London Jan. 23 1907 (and postmarked 10 AM!) to Littehampton. It is part of the series "Picturesque England" and depicts Hayes Common near Bromley.
The cryptic message is:
"I feel very selfish about Nell, really the time flies so quickly & I am afraid that Local work takes up more of my time than it should, however, I have written asking her about a trip to town, which we arranged for at Christmas. Writing later about steamer (?) A."

"Town" would be London, and steamer refers to a ship, but beyond that.....
We'll just have to let the veil fall between us and the past. I have already blogged about my Geology of Utah postcard (on July 3!), so it's time to move on to Nevada. Utah is to the east, Idaho to the north, California to the West. the large areas of orange to the north of Nevada are fairly young volcanic rocks that extend into Idaho. there are some orange blotches to the south too. Note the pink, purple and blue bands oriented north-south, with pale yellow in between. This is the Basin and range part of the North American continent.

[The following information is from a remote sensing tutorial published by NASA.]


Major C.E. Dutton, an early explorer of the American West, described these mountains as they appeared on a map as resembling "an army of caterpillars crawling northward out of Mexico".

Hmm, I see what he's saying. Below is a color - coded relief map (relief: the ups and downs of the landscape) of NV. 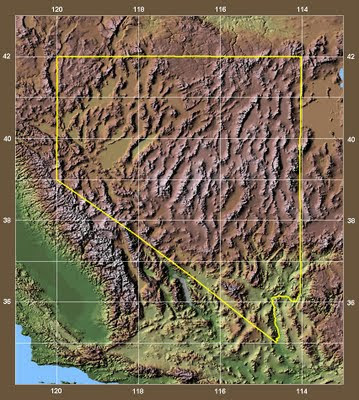 The mountains are uplifted parts of older continental crust. This area was being pulled apart, slowly, and the pieces in-between sank lower. The valleys are filled with a lot of sediment that has eroded from the ranges and partially filled them up. This is what the area looks like from the air. 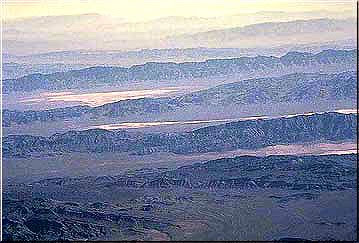 [End quoting]
Some of these peaks are significant. Wheeler Peak in Great Basin National Park is about 13,000 ft (4000 m) tall. What little rain or snow there is falls on these peaks and so the heights are green with pine trees, even white with snow. It is quite different from the dry, hot, desert valleys in between!

There is a wonderful part of the East Humboldt Range where erosion had sculpted the ridges in amazing ways, and the ridge is so thin that there is a hole right through it! This, of course, is called the Hole-in-the-Wall (or Lizzie's Window), near Hole-in-the-Wall Mountain. Please see this website for hiking in the area. The photos are amazing, but copyrighted, so I am not going to reproduce them here.

Las Vegas is way to the south of the state. Many areas in the middle of the state are very sparsely populated. With renewed gold mining in some areas in the north, population has grown somewhat.
Much more detail from about.com: http://geology.about.com/library/bl/maps/blnevadamap.htm
Nevada Bureau of Mines and Geology: http://www.nbmg.unr.edu/

Welcome to Postcard Friendship Friday, hosted by the lovely Marie at http://www.cpaphilblog.com/ 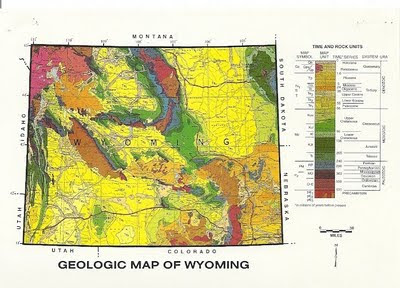 "Geology - interpreting the past to provide for the future"
From the back of this postcard.
"This Geologic Map of Wyoming was reproduced from a part of Geological Highway map n. 5 (1972), Northern Rocky Mountain Region, published by the American Association of Petroleum Geologists, P.O. Box 979, Tulsa, Oklahoma 74101. For a free publications list or for information on geologic and topographic map coverage of Wyoming, contact the Wyoming State Geological Survey at 307-766-2286."

Oh boy, now we are getting into complex geology. And some fantastic scenery.
The big red blob in the northwest corner of the state is Yellowstone National Park, worthy of many postcards and blog posts. South of there is Jackson Hole.

The large oval-ish brown blobs (one is under the "W" in Wyoming) are large blocks of continental crust that have been thrust upwards by plate tectonics, often bending the flat-lying surface rocks above them. The dark green and other colored rocks in the northeast corner are the WY part of South Dakota's Black Hills. Devil's Tower is also nearby. Cheyenne, the capital of WY is in the south east corner and Interstate 80 meanders across southern Wyoming.

Wyoming has many natural resources, including oil (in the aformentioned bent rocks), natural gas, coal, and uranium. A shot from NASA, showing the mountain ranges topped with snow (and portions of other states): 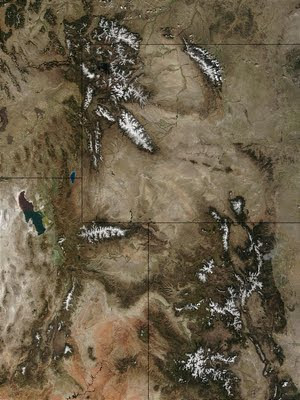