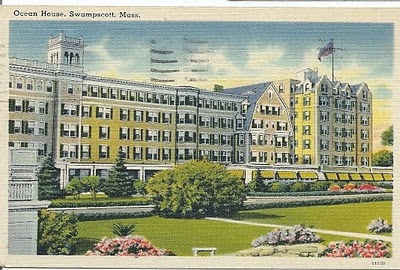 Thank you to our hostess Beth at The Best Hearts are Crunchy for hosting Postcard Friendship Friday. Click on the link to see who else is playing!
This card of the Ocean House, Swampscott, MA was sent June 23, 1949 to Mrs. A.W. Barlett of Milford NH.  It functions in the way an email or a tweet on Twitter would today.

Swampscott is a town in Massachusetts, north of Boston. This website on town history says: "The hotel and boarding house business flourished to serve the influx of summer visitors with the Ocean House, the Hotel Preston, the Lincoln House Hotel, the Hotel Bellevue and the New Ocean House Hotel. Notable summer guests, including President and Mrs. Calvin Coolidge, and Woolworth heiress Ethel Donahue frequented our lavish accommodations.

None of the large hotels remain standing today, most having been destroyed by fire or savage coastal storms, and most of the large estates have been subdivided into single family homes."

I also found out that a similar card is available from CardCow, if you are interested.

Today Beth is celebrating the all-American hot dog and baseball.  Also in summer Americans like to go to the beach.  Ocean House represents the way this used to be done.  Happy Postcard Friendship Friday!

Sent a while ago on Postcrossing. 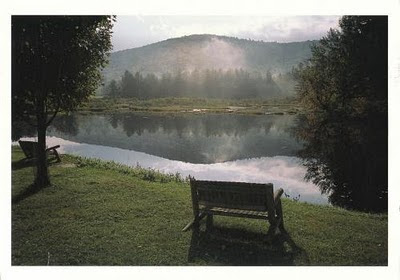 Viridian
Posted by viridian at 3:10 PM No comments: 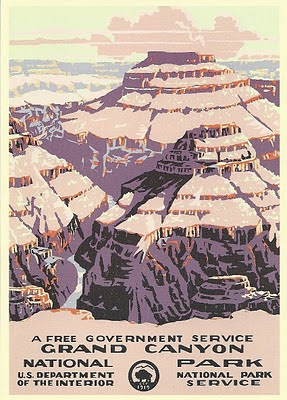 Thank you to our hostess Beth at The Best Hearts are Crunchy for hosting Postcard Friendship Friday. Click on the link to see who else is playing!  Today we are visiting the Grand Canyon National Park in Arizona.

Giving credit where credit is due:
The back of this card says: "Works Progress Administration (WPA) circa 1939, Artist Unknown. Between 1935 and 1943 the WPA's Federal Art Project printed over two million posters in 35,000 different designs to stir the public's imagination for education, theater, health, safety, and travel. Due to their fragile nature only two thousand posters have survived. The National Park image shown here is also available in the original poster format from many National Park bookstores." Published by Ranger Doug Enterprises, Seattle, WA.

I have sent the set of cards off to Val so I can't look at this one in person at the moment!  I have to admit I don't personally like the colors on this card - the Grand Canyon is not that pink, at least not in my memory!  Actually in the full light of day...

From the park website;  "A powerful and inspiring landscape, the Grand Canyon overwhelms our senses through its immense size; 277 river miles (446km) long, up to 18 miles (29km) wide, and a mile (1.6km) deep."


From the geology page: "Grand Canyon National Park, a World Heritage Site, encompasses 1,218,375 acres and lies on the Colorado Plateau in northwestern Arizona. The land is semi-arid and consists of raised plateaus and structural basins typical of the southwestern United States. Drainage systems have cut deeply through the rock, forming numerous steep-walled canyons. Forests are found at higher elevations while the lower elevations are comprised of a series of desert basins." 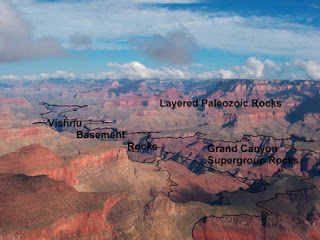 "Well known for its geologic significance, the Grand Canyon is one of the most studied geologic landscapes in the world. It offers an excellent record of three of the four eras of geological time, a rich and diverse fossil record, a vast array of geologic features and rock types, and numerous caves containing extensive and significant geological, paleontological, archeological and biological resources. It is considered one of the finest examples of arid-land erosion in the world. The Canyon, incised by the Colorado River, is immense, averaging 4,000 feet deep for its entire 277 miles. It is 6,000 feet deep at its deepest point and 15 miles at its widest."

The Grand Canyon National Park is one of the most visited parks in the USA.  The park newspapers on its homepage are also available in German, French, Italian, Spanish, Chinese, Japanese, and Korean. 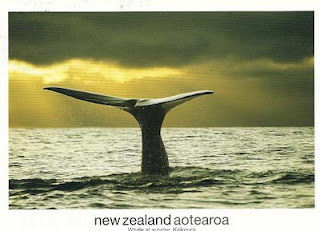 Now and again I will be posting some of my favorites from Postcrossing - usually (though not always) cards I have sent or received.  Just look at the light in this one. Enjoy.
Viridian
Posted by viridian at 6:44 PM No comments: 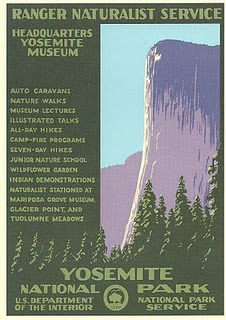 
Thank you to our hostess Beth at The Best Hearts are Crunchy for hosting Postcard Friendship Friday. Today we are visiting the magnificent Yosemite National Park in California.

Giving credit where credit is due:

The back of this card says: "Works Progress Administration (WPA) circa 1939, Artist Unknown. Between 1935 and 1943 the WPA's Federal Art Project printed over two million posters in 35,000 different designs to stir the public's imagination for education, theater, health, safety, and travel. Due to their fragile nature only two thousand posters have survived. The National Park image shown here is also available in the original poster format from many National Park bookstores." Published by Ranger Doug Enterprises, Seattle, WA.

It's hard to believe that the first tourists arrived in the early 1860's to the "Incomparable Valley." Environmental degradation soon followed. According to the park website, "Parts of the landscape were exploited, spurring conservationists to appeal for protections. President Abraham Lincoln signed an 1864 bill granting Yosemite Valley and the Mariposa Grove to the State of California. John Muir helped spark the creation of Yosemite National Park in 1890." As long ago as Lincoln! I did not know that.

The image on our postcard this week is of one of the magnificent domes, made from glacial action and erosional action on the granite (actually granodiorite, technically) bedrock. The most famous is Half-Dome. Another is El Capitan. I believe the view on this postcard is El Capitan.

The hard way up Half-Dome is technical rock climbing up the sheer northwest rock cliff. The 'easy' way is a hike through the woods to the base of the east side (the back side so to speak) and then onto the rock itself with a total elevation gain of 4800 feet (1460 m). According to Wikipedia, the last 400 feet of nearly vertical climbing is up the rock between two steel cables used as handholds, raised on a series of metal poles. The cables are attached to the rock but the poles are not. Look at that photo of Half Dome in profile! No matter where you put the trail it's going to be tough, as you can see in the photo of people on the Cable trail (Pictures from Wikipedia).

Even with all this there can be crowds and up to 1000 people a day have hiked this trail. Therefore, permits are now required to hike this trail on Fridays, Saturdays, Sundays, and Federal holidays when the cables are up (usually Memorial Day through Columbus Day). See the National Park webpage for more information.

There is so much more to say about this park - the waterfalls, the geology, the ecology, the history... but I have a load of work to do!