Good day and welcome to my blog.

Our hostess for Sunday Stamps has set "celebrating an historical event" as our theme for today.  I have a stamp I have shared before, in 2014 or so: 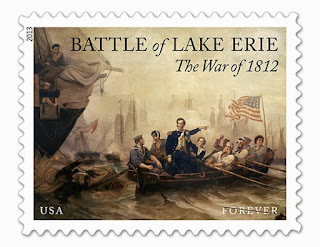 As I wrote at that time:

Canadians may have a different view of this conflict!

Why, yes, we do ;)
It is not a 'forgotten conflict' where I live in Niagara.
It is also a war in which no one really won as everything remained status quo when all was done.

Good balance to stand in the boat. No wonder you have named a number of naval ships Oliver Hazard Perry, that Hazard middle name always sticks in the mind.

Thanks for the lesson!
I think the colours of the stamp go perfectly with the subject.