I am happy to join in this week!

This is a stamp I have shared before, but perfect for today.  A stamp from Poland: 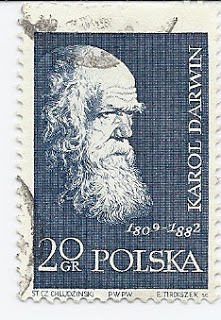 He certainly has an expressive face in this stamp!

This portrait is well know even though the stamp is new to me.

Its always fascinated me that Darwin studied earthworms for decades right up to his eventually demise.