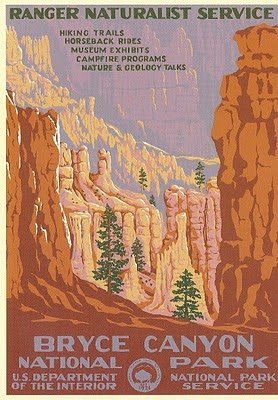 Today is Postcard Friendship Friday, hosted by Beth at the Best Hearts are Crunchy.
I don't have an Earth Day postcard, but here is a postcard of one of the most amazing parks in the American West (Arches is up there for me too!) Oh heck, they are all amazing. This postcard is actually a new design following the design of the old WPA posters. The artists are Doug Leen and Brian Maebius. I like the receding cliffs and the changes in color, and the artfully placed pine trees.
My previous post describes this series.
Bryce Canyon, according the National Park Service, is a small national park in southwestern Utah. Named after the Mormon Pioneer Ebenezer Bryce, Bryce Canyon became a national park in 1928. The rock type here is actually limestone, not sandstone as I originally thought. The spires of rock seen in Bryce are called hoodoos and are formed by weathering and erosion.
Viridian
Posted by viridian at 10:46 AM

There is something familiar about the distinct shades and colors that I just put my finger on: paint-by-number canvases! Love it, thanks for posting it. Happy PFF!

Sometimes it is easier to paint a scene than to photograph it. Love the changes in colour.

gosh - that's a great observation about the paint by numbers similarity linda - you're right!
great card - i think it's difficult for us in europe to appreciate the sheer scale of these canyons...hopefully i'll see them myself one day!

Yes Linda I see it: paint by number projects. Not that there's anything wrong with that. ;-)

I've seen a lot of GOOD Retro poster art lately, this being no exception. Great image.

Hoodoos is a great word--I never saw it before.

I love the colors in this postcard. All the oranges, lavendars and yellows. Beautiful!

I love these reprints of time past... thanks for sharing. PFF

I love the postcards of the WPA posters. There's just something so special about them. Happy PFF.

Howdy
Happy PFF ,wow this is an incredible card.
Thank you for sharing.
It brought back some happy family moments for me of the one vacation I had with both parents as a child.
Have a wonderful weekend.
Happy Trails

The artist has caught the style and the atmosphere very well.

What bright vivid colors! I love the WPA series ... and I also love the word "hoodoos"

Coloring Outside the Lines said...

This reminds me of the 50's for some reason. Happy PFF!