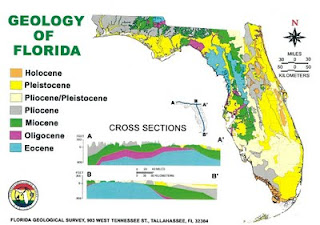 Published by the Florida Geological Survey, Tallahassee, FL.
From the back of the card:
"The surface and shallow subsurface of Florida is composed entirely of sedimentary rocks - limestone, dolostone, sand, and sandy clay, deposited in and near a shallow marine environment. The thick section of carbonate rocks underlying the state has given rise to our many large springs and lakes. Florida produces 75% of the nation's phosphate and has large reserves of high-quality limestone, sand, peat, fuller's earth and heavy minerals."
Florida has much fresh groundwater and caves underground and beautiful lakes and springs, such as Weeki Wachee. However, pollution that gets underground can quickly contaminate the groundwater.
Phosphate is used as a fertilizer.
I was on the road last week, so a late entry today!
viridian
Posted by viridian at 2:14 PM

Where do you find all your geology postcards??

Yes! You wow us every week with these fascinating cards. They rock (bad pn:) Musey is going to love this one!

I understand the Everglades are in trouble... I visited last year.

That's some interesting info! I like to go out and look around at what is actually beneath my feet.