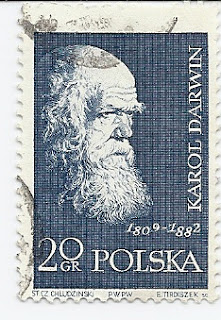 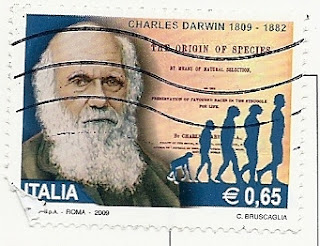 A few years ago, during the celebrations of 200 years since Darwin's birth, I was joking with a scientific colleague of mine.  "So, Dr. M., you are almost 50, about when Darwin published On the Origin of Species.  And hey, Barack Obama was under 50 when he became president, and won a Nobel Peace Prize.  What have you done lately?"  "Speak for yourself," he replied. "You are almost 50 too!"

Please join me in this celebration of Science and Scientists.

Theme next week:  Food and drink of all sorts.  Also: keep your eyes open for Olympics stamps, to be featured later in July.

Hi Viridian and all Sunday Stampers! A very fun theme this week. I really like your Darwin stamps too, especially the Italian one. I wonder how many countries have issued stamps featuring him? I bet there are plenty!
Cheers, Helen.

A contrast of designs. Didn't know he was buried in Westminster Abbey.

he is certainly a most recognized man!

Great theme. Love the stamps. My posting is now up. Happy Sunday Stamps.

I'm bring up the rear this week. I'm sorry you had trouble visiting mine last week. I've been away so I'm not sure what can have happened.

I love your Darwin stamps. His home is not too far from where we live and I keep meaning to visit but still haven't managed it.