A Saturday dinner spent with family, and after that, time for Sunday Stamps. 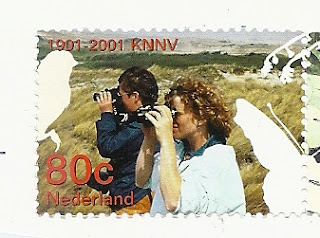 Here is a stamp that I interpreted as celebrating bird watching and butterfly watching, and it can be that.  Actually it is a stamp issued for the 100th anniversary of the KNNV, the Royal Dutch Society for Natural History.  In their words:  "The KNNV is a society which aims at active participation in and with nature: through the enjoyment of nature, through natural history studies and through nature conservation. In other words the KNNV is a society for field biology."

I am interested in seeing what other people may have dug up for this theme.  Stamp collecting is an obvious choice, but we've had that theme before.What hobbies do you have to share?  join me with your link below.

Posted by viridian at 7:54 PM 6 comments: Links to this post

Another nice day here in the Midwest USA, though with more of a chill in the air.

Our theme this week:  Ships of all sorts.

The stamp for today features one of the most famous ships in early American history, the USS Constitution. 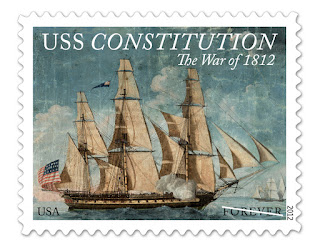 Let's let the US Postal Service describe the history and the stamp:

"The War of 1812: USS Constitution (Forever®) issuance by the U.S. Postal Service in 2012 commemorates the bicentennial of the War of 1812, a two-and-a-half year conflict with Great Britain that many Americans viewed as the nation's “Second War of Independence.” The War of 1812, sometimes called “the forgotten conflict,” was a two-and-a-half year confrontation with Great Britain that brought the United States to the verge of bankruptcy and disunion. With this stamp, the Postal Service commemorates the bicentennial of a war that ultimately helped forge our national identity and gave us our national anthem, “The Star-Spangled Banner.”

The United States declared war on Great Britain on June 18, 1812. In his war message to Congress, Madison charged the British with violating the nation's sovereignty by restricting American trade with Europe and by removing seamen from American merchant ships and making them serve in the Royal Navy.

The War of 1812 was also fueled by a desire among frontier settlers to force the British out of Canada and end their support of Indians in the Old Northwest. Many Americans, including expansionist “War Hawks” in Congress, alleged that the British supplied arms to Indians and incited them to raid settlements on the frontier.

For the design of the first stamp in the series, the Postal Service selected the oldest known painting of the famed USS Constitution by Michele Felice Cornè, circa 1803. Constitution acquired the nickname “Old Ironsides” during a victorious battle with HMS Guerriere in August 1812, two months into the war. It scored another victory in December over HMS Java. Such stunning successes against the world's mightiest navy helped sustain American morale during a time the U.S. Army was suffering major setbacks.

Art director Greg Breeding evokes the times by using the color and texture of a contemporary map of the war for the stamp pane's background."

(With apologies to my British readers - this was 200 years ago.)

I live in a part of the Midwest that did experience Indian raids during this time.  Although it's not clear whether these were 'incited' by the British.  The Constitution lives now in Charlestown MA and takes one cruise a year, on July 4.  See the Ship's web page for information on the ship and on future events.

Theme next week (by suggestion): stamps depicting hobbies.  I finally have one I can use.

Please join me, and add your link below.

Posted by viridian at 7:32 PM 9 comments: Links to this post

It's Saturday afternoon here in the Midwest of the USA.  Leaves are in good color, and falling fast.  I just wish it were sunny - love Fall days like that.  Today it is bright but a gray sky.

So, it must be time to set up my post for Sunday Stamps.

This week's theme: The folkways of various cultures. folktales, food, costume, pottery, you name it.  We have had this theme before but it is always interesting to see what people contribute.

What I have is 2 stamps from Romania, sent by Danut (bardamu1964) in a private swap. 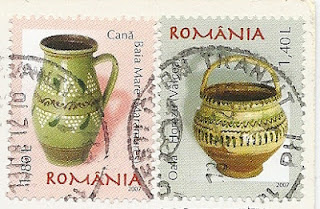 On the left is some pottery from the Maramures (Marmatia) area of Romania.  On the right, pottery from Valcea area.  ( I am sorry, I cannot reproduce the actual letters of the Romanian alphabet).

Enjoy your weekend, enjoy your Fall (or Spring, in the Antipodes), and join me for Sunday Stamps.

Theme next week: Ships of all sorts.

Posted by viridian at 5:04 PM 7 comments: Links to this post

Oh boy it's been a busy week and I'm feeling a bit tired. That won't slow me down, not yet. Time for Sunday Stamps.

This week's theme: Civic or public architecture, especially bridges and other public works.  I had a stamp from China in mind when I proposed this theme. 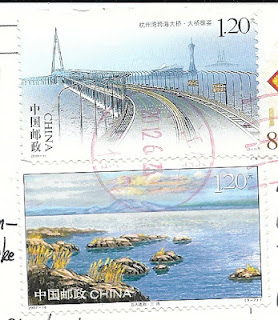 I wish I knew where this bridge is, and its name.  There appears to be a large building in the distance.  Somehow I think in real life the bridge carries many more cars than are shown here!!!

Edited to add: This is the Hangzhou Bay Cross-Sea Bridge.  Thank you Postcardy for that information.
Below, a marine landscape with a mountain in the distance.

Join me this week with your own stamps of public architecture, interpreted broadly.

I have a page for this blog and my other blog on Facebook: http://www.facebook.com/pages/Viridian61/347674418583948?ref=hl Like that page to have quick notice of when posts are up (and very little else).

Theme next week:  The folkways of various cultures.  folktales, food, costume, pottery, you name it.

Posted by viridian at 8:23 PM 7 comments: Links to this post