This is a long Holiday weekend in the USA. I wonder if many people remember the real reason for the holiday. Now it seems like the opening weekend for summer.

I am readying this post on Thursday night before I and my family take off too on a road trip in grand American tradition.  We are traveling to a fine eastern institution of higher education to see my nephew graduate from college.  Hurrah for him!

This post will be up on Saturday afternoon.  Our theme: Share a stamp commemorating a person or event worth remembering.

An image from the US Postal Service: 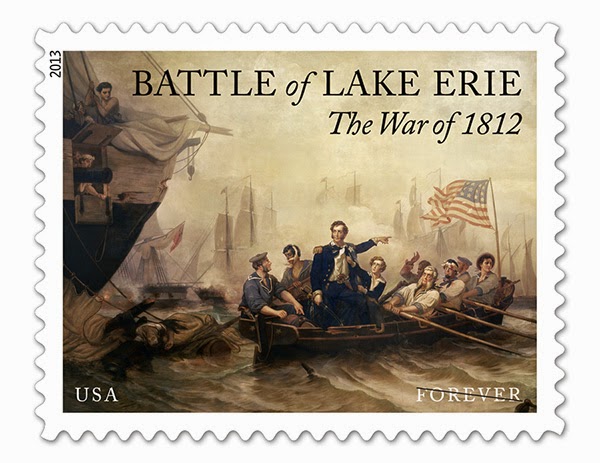 I have a feeling the Canadians may have a different view of the War of 1812 and this battle!
Join me with a commemorative stamp this week.  I am traveling but I hope to visit your web pages by Monday.

Theme next week: Music and musical instruments.
Theme week after that: Airplanes and air transport.

There have been a few discussions on what might have been had we 'won' Detroit ;)

wars are never nice when they happen, but sometimes there are indeed nice war-themed stamps...and this one, with its image and colours, does bring that shudder down the spine..

That is an attractive stamp. I'm afraid that I have forgotten the reason for that war.

so much detail, very atmospheric. we tend to forget how frequent wars were in the times past

it was a war where nobody won. but the celebrations in this part of the country were endless during 2012-13

For some reason my memory has retained the fact that there was/is an American naval ship named after Perry so interesting to learn part of his story. Although war is terrible naval paintings are fascinating, especially if from centuries past.

It's a lovely stamp but it commemorates a war that I know almost nothing about. It's interesting/thought-provoking how different points of view interpret situations.

Everyone's stamps this week, including yours, have taught me something new. Great theme.

It could be interesting to have a list of all the themes of Sunday Stamps, for people (like me!) who weren't here at the beginning.

Forget me if any of this themes has already appeared:
-reptiles
-time
-ecology
-fairies
-boats
-flags
-circus
-typical festivals
-mushrooms
-...

I hope at least one will be useful!