And after setting the theme to be Irish stamps, green stamps, etc., I find I don't HAVE any stamps from Ireland!
This Stork -billed Kingfisher will have to do. 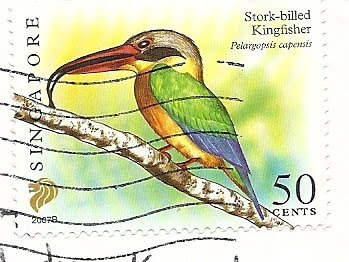 A stamp from Singapore, which came to me on a Postcrossing Postcard.   From Wikipedia: "The Stork-billed Kingfisher, Pelargopsis capensis (formerly Halcyon capensis), is a tree kingfisher which is widely but sparsely distributed in tropical south Asia from India and Sri Lanka to Indonesia. This kingfisher is essentially resident throughout its range.  This is a very large kingfisher, 35 cm in length. The adult has a green back, blue wings and tail, and grey head. Its underparts and neck are buff. The very large bill and legs are bright red. The flight of the Stork-billed Kingfisher is laboured and flapping, but direct."

They are not common, but not considered endangered.

That bird reminds me of Pinocchio.

I must have some old Irish stamps in my old stamp album, but I decided to use the "green" part of your theme.

Beautiful stamp! I've been on a big bird ephemera kick. What an impressive beak on this kingfisher.

Nice stamp! Looks like a curved beak, but it has a fish at the tip. :)

What a handsome bird and a beautiful stamp. For some reason I have always been afraid of birds - especially with long, sharp beaks like that stork-billed kingfisher.

A beautiful bird! I thought it had a curved beak until I read the comment above. :)

Magical birds, both on the stamp and on river banks.

I finally made it to Sunday Stamps! What a gorgeous stamp - I collected ornithological stamps as a child - I'll dig some out and post them at Penny Black 1840.