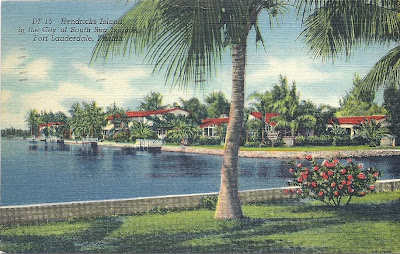 "Hope this card is not a duplicate of one I sent before.  It will be a long while yet before I can recover from the hurricane.  They can't even get around to make an estimate on my roof for weeks.  Agnes."

Agnes had just been through one of the strongest hurricanes of the 1940's, that made landfall near Fort Lauderdale, FL. According to Wikipedia, "The storm made landfall on September 17 near Fort Lauderdale, Florida as a strong Category 4 hurricane with maximum sustained winds near 155 mph (250 km/h). Winds of hurricane force extended out roughly 120 miles (195 km) from the center in all directions."  The hurricane weakened as it crossed the state but survived to move across the Gulf of Mexico and threaten New Orleans with 110 mph wind gusts.  51 people were killed by this unnamed hurricane.

This tropical cyclone is one of only five hurricanes to make landfall on the United States with maximum sustained winds of at least 155 mph (250 km/h).  The next one would be... Hurricane Andrew.  Yet this unnamed storm is largely forgotten today.

Looks so peaceful on the card. Business appears to be booming for roofers.

You would not know there was a hurricane from the postcard.
Judy

This card could have been sent a few years ago with the same text.

We lived in Miami during 'Andrew' I was 8 or 9 months pregnant at the time! It was a very loooong night.

We've had a couple of extreme storms in the UK but we don't have hurricanes, thankfully. the two storms I've experienced were quite bad enough.

I've always lived where there are tornados. Have been very close to two but never in one, thank the good Lord. I am a nervous nellie when there are storm watches and warnings out. By the way, beautiful card!!

Such a peaceful setting. I could use a bit of that right now. Thanks for sharing.