I am composing this entry on Friday night, before taking off for the weekend, and setting up this post to be published Saturday at 5 PM. I hope blogger is able to do this!

It's Memorial Day weekend in the USA (many people get Monday off) so therefore the theme: Let's share people honored by a stamp for any reason (historical, politician, writer, artist, educator, Nobel prize winner, anything), and you are happy that they are featured on this stamp. Tell us about this person.

My early choice was Helen Keller and Anne Sullivan as I admire both of them. However, they have already been featured by Ann at Tin and Sparkle.  Plus I don't actually have the stamp, which is an issue.  So here is a great scientist: 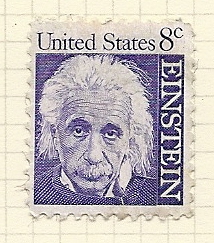 "Einstein's researches are, of course, well chronicled and his more important works include Special Theory of Relativity (1905), Relativity (English translations, 1920 and 1950), General Theory of Relativity (1916), Investigations on Theory of Brownian Movement (1926), and The Evolution of Physics (1938). Among his non-scientific works, About Zionism (1930), Why War? (1933), My Philosophy (1934), and Out of My Later Years (1950) are perhaps the most important." From Nobelprize.org


He received the Nobel Prize in Physics in 1921, and is considered the father of modern physics.  Wikipedia also has a generous entry about him.  There is a website called the Einstein Archives Online which also may be of interest.
You don't have to feature a Nobel Prize winner - anyone on a stamp you wish!
Viridian

Theme next week;  Anything you wish.

I think Einstein has one of the most recognizable images of anyone.

A worthy entry. Now I'll have to look for someone else.

I chose a great scientist too!

Nice theme this week. I went for explorers.

Iconic image. Brain the size of a planet but with great humanity.

I was late (Monday morning) in submitting my link just to found out that the linky is already closed. :(
Here is my Sunday Stamp

Great theme this week, it's lovely to see all the different choices :)