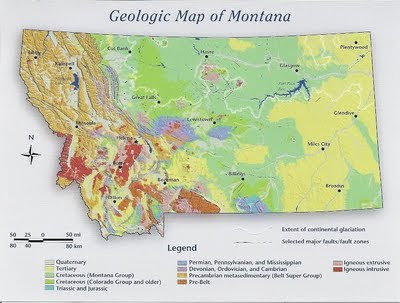 Nothing too creepy from me, but see Postcard Friendship Friday for more from our hostess Marie and other people playing along. I'll skip the catacombs of Paris, thank you.
Today, the big wonderful state of Montana. Haven't been to the Big Sky country? Please go, for it's really beautiful. Yellowstone is in that inside corner. Glacier National Park is not to be missed.
The legend shows igneous rocks in red and pink. Very old rocks (over 1,000,000,000 years old) are in deep orange. Lighter orange is a formation called the Belt Supergroup. This is a very thick layer of different sedimentary rocks, some with pretty coarse (boulder-sized) stream sediments. Big mountains had been uplifted nearby and were eroding in a hurry.
The blues and greens are younger, Cretaceous or the time of the dinosaurs. There are some famous fossil localities in the general area of Great Falls.
Much later, bits and pieces of the Western USA came crashing into the North American continent. In a previous post I had described mountain building as a process similar to a carpet on a hardwood floor rumpling. Here, the push was so hard and so sustained, the rocks broke along faults and slivers were pushed up on top of other pieces. Think of how you can bend a piece of wood, but if you keep bending it, it will break. The faults are shown as thin black lines, esp. in northern Montana.
The other thing to note is the white line with hash marks along it. This is the extent of continental glaciation at the height of the last Ice Age, a pretty recent event in geologic time.
Ok, enough geology, I can see your eyes glazing over. Remember, there's a quiz next Friday! ;-)
Montana Bureau of Mines and Geology (MBMG)
USGS links for Montana
Glacier National Park
viridian
Posted by viridian at 8:26 AM

Hi!
Beautiful postcard! Love all the different colors and the shape of the card. Thanks for sharing. Have a great day!

Sherrie
A View of my Life
http://splummer-aviewofmylife.blogspot.com/2009/10/postcard-friendship-fridays_30.html

Happy PFF. Love the name Plentywood. Sounds like a good place to live if you aim to keep warm!

Interesting to have the glaciation marks on there too. before the quiz, can we please have a study session, where we get to see rock samples for the various areas?

Hey, thanks for the heads up! I'd have made it to your entry (I worked through column 1 last evening), but you gave me incentive to start with yours today! Many Interesting geological formations in many places in this state. There's a little round spot near the Canadian border about centered between the Idaho & ND border called the Sweetgrass Hills. There was precious metal mining in several places there, but apparently not enough of whatever it took in the cooking process to produce much gold or silver.

I'd like to see Yellowstone sometime. I have been to Glacier Park once.

Happy PFF. I always wonder where you will take us and what I will learn! Thanks again!

Wonderful postcard of Montana--yes, I've visited that wonderful state--someday I'm going back there!