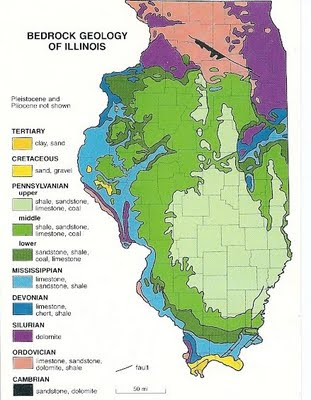 From the back:
Sedimentary rocks ranging in age from about 510 million (Cambrian) to 290 million (Pennsylvanian) are at the bedrock surface in Illinois and were deposited in and near ancient fluctuating seas. Cretaceous sands and gravels deposited in extreme southern and western Illinois are about 100 to 66 million years old. Tertiary rocks were deposited as coastal plain and deltaic sediments between 66 and 2 million years ago. Coal, oil and gas, building stone, fluorite, clays, groundwater and other resources in the bedrock contribute several billion dollars annually to the Illinois economy.

In Europe, The time period correlating to the Mississippian and Pennsylvanian periods is known as the Carboniferous. It was a time of great swamps, both in physical extent and how long they lasted. Large amounts of plant material were deposited, which later changed to coal. Half of the USA’s electricity is generated from Coal-fired power plants, so this is still a major commodity. (It sells for $40 - $50 a short ton – don’t ask what a short ton is!) See more information (LOTS more) at the Energy Information Administration http://www.eia.doe.gov/fuelcoal.html.

Fluorite is a mineral with the chemical composition CaF2 – calcium fluoride. It is mined for the fluorine for industrial purposes.

We are in the heart of the continent – lots of flat-lying sedimentary rocks here.