With our lovely hostess Marie, at Vintage Postcards. 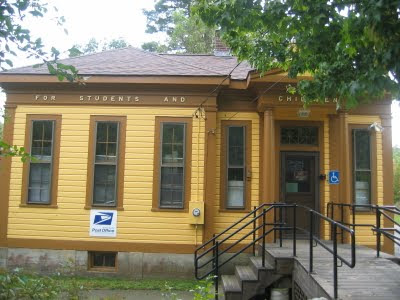 I was traveling last week and was sure to stop at this brightly painted building, that I had noticed on a previous trip to western Massachusetts.
This is the West Chesterfield MA (Massachusetts) post office at 627 Main Road (also know as State Route 143), 01084-9998. "For students and children?" Is it a museum? No it is an honest-to-goodness US Post Office. I checked on line. 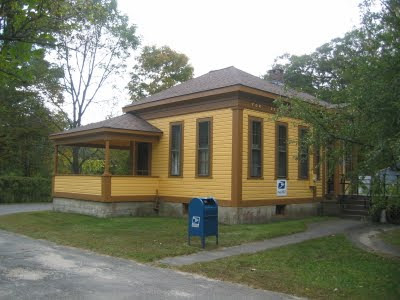 Too chicken to go in (and running later for meeting a friend for lunch!) The population of West Chesterfield is 147 people.

This post office should NOT be confused with the Chesterfield MA post office, less than 2 miles away on route 143, with the zip code of 01012-9998.

Chesterfield MA has a population of 523 people.
Both these towns (I use the word loosely) reached their peak of population over 100 years ago, double (or more) what it is now. West Chesterfield is more of a hamlet. Chesterfield has two general stores, a town meeting hall, the library, a bed-and-breakfast, several churches, the ambulance/fire station garage (volunteer of course), and maybe other businesses that are not on the main road. It was founded in 1752, has few to no modern houses, no gift stores or boutiques. In other words, an untouched New England town.
Chesterfield town website.
Hampshire county website.
Viridian
P.S. When they called this place New England, they meant it! Other counties in Massachusetts are Berkshire, Essex, Middlesex, Norfolk, Suffolk, Bristol, and Plymouth.
Posted by viridian at 8:54 PM

Well, I'm glad to know I'm not the only one who stops to photograph colorful buildings in small towns. How interesting there are two Chesterfield post offices so close together! But being new England, I'm guessing only an out-of-stater would be confused. :-)

I am surprised that so many small post offices still exist. I love that yellow color.

My Bangkok Through My Eyes!
You got a Posty: I want to

I love old houses. When I first moved to this suburban community over 20 years ago the local post office was in a building that was almost as small as a postage stamp. I wish I'd photographed it back then. About 12 years ago we got a nice modern brick building. I miss Nan the postmistress and the postage stamp building.

Have a beautiful weekend

Lovely building. The "for students and children" is very puzzling. It makes me think it was a school before it was a post office?

Yes, the book I have is written by Robert Stevenson! How cool that you know that! (grin) Have a wonderful day, and happy PFF!

Thank you also for your kind comments on my blog. ((hugs))

I agree, this was probably a school once upon a time.