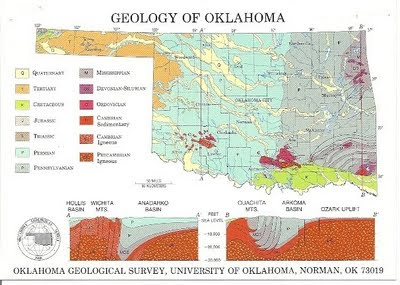 Published by the Oklahoma Geological Survey, Univ. of Oklahoma, Norman OK
From the back of the card:
"The geology of Oklahoma was formed through millions of years when rocks that represent each geologic time period were deposited. Sedimentary rocks dominate exposures across the state, with major areas of igneous-rock outcrops located in the Arbuckle and Wichita Mountains of south-central and south western Oklahoma. The Oklahoma Geological Survey was formed in 1908 to investigate the geology, the energy-, mineral-, and water resources of the State and to make the results available to the public."
First of all, the 'mountains' of Oklahoma are really ranges of hills. The prairie are so flat though, they must have looked impressive.
The red colors on the map are old, uplifted igneous rocks. The tan and green colors are the various sedimentary rocks. The squiggles of yellow are recent river deposits - everything since about the Ice Ages is recent to a geologist!
The cross-sections at the bottom contain some important information. This is a view sideways through the crust and you can see the bending and folding of the layers. (How do they know this? Interpretation of seismic or earthquake studies.) The Anadarko and Arkhoma basins have produced a lot of petroleum, and continue to produce oil and lots of natural gas, which is Oklahoma's main petroleum product. An overview on how these resources formed is described on a Survey webpage. Oklahoma is not living in the past however. They are investigating wind energy too.
Viridian
Posted by viridian at 5:34 PM

Ah yes, wind energy, veridian! "O Oklahome, where the wind comes sweeping down the plain..." :) I have a post for PFF up too!

Another educational postcard .. too cool! I'm learning a lot of geology!

Darn - looked up the lyrics to Oklahoma but Mary beat me to it!!
Evelyn in Montreal

I am amazed at all the geology postcards you have. Very educational.

Do you have one of Montana? I'd certainly enjoy making an envelope from a copy of a MT geology card...

Yes I DO have a Montana card. I am slowly going east to west through the USA. So wait a few weeks!

Lovely educational card you got :)

You Got A Posty
All Little Things I Like

"Seismic studies"? I don't buy it. Probably they just asked the prairie dogs what it looks like down there.

Thanks for sharing this to PFF, Viridian. You're exploring an interesting niche of postcards, and you write about it with the right distance. Please continue.

Have a beautiful weekend

Hi!
Very nice postcard! Lots of info too. Have a great day!

It's doubly interesting for me, because I first have to establish the position of the states you mention. I'm getting better though! :)

This postcard's very informational. Never thought they make one of these ... but then what do I know, am still pretty new at this stuff.

Ｖｅｒｙ informative !
Thanks for sharing it.

Thank you for the sweet shout out! Your lovely hostess has been emotionally pooped lately! I'm amazed by your geology cards too! They are such a treasure:)