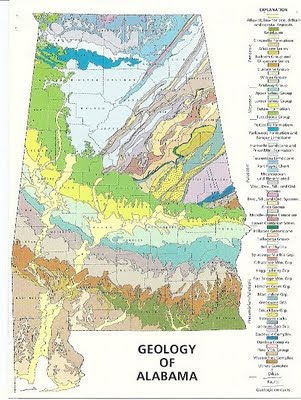 Hmm. The printing on the legend is pretty small on this one, and I did not scan at a super high resolution. I'll tell you though that most of the rocks in Alabama are sedimentary rocks, made from rock particles laid down by wind or more likely water.
The oldest rocks are at the bottom of the legend, and the youngest are on top. The pattern in the upper right, of different rock layers trailing from southwest to northeast, is the absolute tail end of the Appalachian Mountains. Now, the Appalachian trail ends in Georgia. No mountains here in Alabama, just low hills. But they were folded like this because of collisions between 2 tectonic plates. Yep, long ago Africa crashed hard into North America (esp. at the latitude of North Carolina), and rocks were folded and uplifted as a result. Think of a carpet on a hardwood floor rumpling. Some folds are big, but they flatten out at some distance from the dog or child doing the rumpling.
Southern Alabama is made of younger sedimentary rocks, laid down when sea level was much higher than today. Pale yellow represents the most recent river and delta sediments. The prominent bay in the south is Mobile Bay.
Happy PFF, and happy geologizing!
Viridian
Posted by viridian at 6:14 PM

The astronomy picture is making the right column shake. Is it supposed to do that??

Er no, the right column should not be shaking. I'll try to fix it.

I can't see the state anymore without thinking of Bubba Gump.

Shaking columns? Sure it's not tectonic activity?

Interesting! I liked both the card and the comparison with the carpet.

I love your explanations, it makes it so much easier to understand.

Hi!
Awesome info!! Thanks for sharing. Have a great day!

Thanks for the info about Alabama and the very interesting postcard! How does one get into Postcrossing? :)