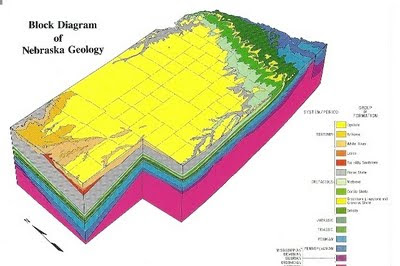 Hello everyone to one of my favorite memes, hosted by our wonderful leader Marie, at Vintage Postcards.

Remember I am going through the USA from generally east to generally west, so hold on please for Montana and California.
We have the cut away block diagram and the legend or key on the right side, with youngest rocks (yellow orange) on top and older rocks (greens, then blues) on the bottom. Gee, just like the rock layers in Nebraska.

Well! In the center of the continent there are many layers of flat-lying rocks. The bright pink at the bottom represents the old old basement rocks of the Precambrian. The thick gray layer is the Pierre (pronounced 'peer') Shale, named after the city in South Dakota, which after all is the state just north of Nebraska.
The state website is: http://www.nebraska.gov/dynamicindex.html.
The rolling plains of the American West is here, especially in the Sandhills region of north-central Nebraska. See these beautiful photos of this area. I have driven through here, and it is a beautiful place, empty of humans, but full of grass, sky, and wind.
And FYI: Willa Cather spent her formative years in Red Cloud, Nebraska.
Posted by viridian at 8:09 PM

You have such a great collection of maps. My students will be visiting your sites in a week or two.
Evelyn in Montreal

Well, that's interesting! Its not often you see a geology map on a postcard!

This is so much fun and I'm learning lots too!

O.K.,
You are now forcing me to dig out my old college geology book, so I can put this all in perspective. I have to get to the bottom of this :)

I went through Nebraska once and thought it was very boring--now I can see why.

Viridian, I should look back at your posts and see if you've done the Northeast - New York City and Long Island in particular. I know we have a lot of shale around... Thanks for sharing a topic I know little about! :)

Mary: No I don't have a postcard of New York State. I have done MA and NH however.
Postcardy: too bad Nebraska doesn't have a song like Oklahoma!

huh !! really pretty.
Do you have extra to do a swap ?

What an interesting postcard! I've never seen anything like it before. Thank you for sharing. Happy PFF!

What I need is a map of the US state outlines so that I can plot your progress. I'm learning the states gradually but it's slow. Some are easy but there's a big hazy area in the middle. :)

I'm learning so much too! I knew that I should have payed more attention in Geology class!