It's time for Sunday Stamps again.  This week our theme is architecture, to be interpreted broadly.  I have to share with you a stamp from a Postcrosser in Italy, which arrived about a month ago. 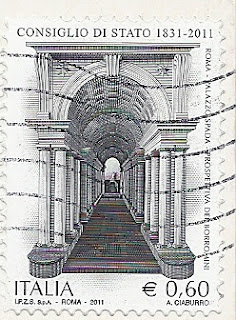 This stamp shows a hallway in the Palazzo Spada, which was originally built in 1540.  Why does it deserve a stamp?  Let's let Wikipedia explain.
"The palazzo was purchased by Cardinal Spada in 1632. He commissioned the Baroque architect Francesco Borromini to modify it for him, and it was Borromini who created the masterpiece of forced perspective optical illusion in the arcaded courtyard, in which diminishing rows of columns and a rising floor create the visual illusion of a gallery 37 meters long (it is 8 meters) with a lifesize sculpture at the end of the vista, in daylight beyond: the sculpture is 60 cm high. Borromini was aided in his perspective trick by a mathematician."
Pretty cool, and a good stamp for today!
As I was thinking about this week's Sunday Stamps, a card from Russia arrived with this stamp: 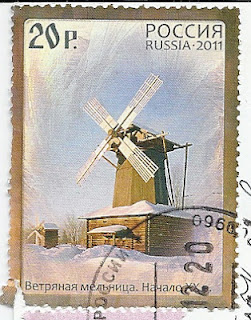 with a humble but useful windmill.
Viridian

Theme next week: It's National Poetry month. Let's search out stamps of poets or stamps that show quotes from poems or something related to poetry. Interpret this broadly. (A landscape that makes you think of a poem?)

That's a cool effect in the Palazzo Spada.

That is so cool!
Mathematics is an amazing tool, isn't it?!

Great theme, Viridian! Very fun to research. And I really love your stamp of the Palazzo Spada. How clever!

The Palazzo looks amazing, you would never guess its size from the stamp.

I see you've had a tilt at windmills as well.

I'd love to see the actual Palazzo, after seeing that stamp. Amazing.

Looks as though you could just step into the Palazzo stamp, amazing effect. A windmill in snow is not the usual view.

The perspective on the first stamp is really wonderful.