It's Sepia Saturday!
I am posting today one of the most famous flight photographs of all. Maybe another participant did too - but I admit I did not check. 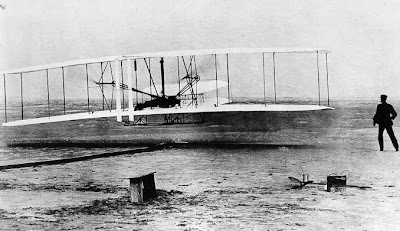 "The most famous aviation photograph ever taken.  The Wright biplane, piloted by Orville Wright, has just taken off from a monorail launching strip on a field at Kitty Hawk, North Carolina on 17 December 1903.   Wilbur Wright, running along the right side of the aircraft, held onto the wing to balance the machine until it left the monorail.  This is the only photograph of the world's first flight in a power driven heavier than air machine, which was invented by Wilbur and Orville Wright.  This picture was taken for the Wright Brothers, and posterity, by Surfman J. T. Daniels, a member of the crew of the Kill Devil Hills Lifesaving Station.  He and the other members of the crew assisted the brothers......  More importantly, they acted as eyewitnesses to the flight."

Be sure to check out the next Sunday Stamps post, up shortly.  The theme is poets and poetry.

I haven't seen anyone else with this picture today. In fact, I've never seen it before at all. It'a a piece of history I should know better though I do know Wright brothers.

Well, I’m glad somebody posted about this! Great photo of these pioneers.

I'm glad you posted this, as I don't think anyone else did.

No, you are definitely the first with this image. A great find and so well presented.

I've seen the photo but not that whole description of the flight. Was surfman his name or what?
Nancy

Way cool! Thanks for finding it for us. I enjoyed hearing the details too.

You are the first to post it for this theme, nicely done too! It is a great photo!

That plane is hanging from the ceiling at the Air and Space Museum. It's quite a sight.

How did we all miss this. I'm glad you didn't.

Kudos to you for thinking of this photograph. It's perfect for the theme.