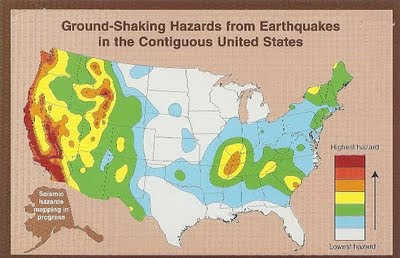 Published by the US Geological Survey.
From the back: "USGS Earthquake Hazard Map showing earthquake ground acceleration having a 10 percent probability of being exceeded in 50 years for a firm rock site condition. This map is based on seismicity and fault-slip rates and takes into account the frequency of occurrence of earthquakes of various magnitudes. Locally, hazard may be greater than that shown, because site geology may amplify ground motions. Map for other parameters and probabilities of exceedance may be found on the Internet."
OK, in everyday language:
Where earthquakes (EQ) have happened in the past, they are likely to happen again. We also know the location of the San Andreas fault and other faults. These areas are likely to have earthquake shaking in the future.
Big earthquakes are rare but the ground shakes a lot. Little earthquakes are more common but the shaking is much less.
Red areas can be interpreted as areas where EQ are likely to happen in the future, and the shaking will likely be pretty strong. This includes the San Andreas fault area in California, but also the area from Death Valley north along the state line. Also Yellowstone National Park. White areas are safest. In terms of statistics, Wisconsin and Minnesota have had the least number of earthquakes of all the states.
Surprising areas of past EQ activity: Charleston, SC. There was a devastating EQ there in the 1880's and nothing much since. Central USA: 3 huge EQ's in 1811 - 12 that knocked down most houses, scared the **** out of everyone, dropped large areas of the land and momentarily made the Mississippi River run backward. Click on that link if you don't believe me. Still, many tiny earthquakes happen in that area weekly.
See a map of current earthquake activity at http://earthquake.usgs.gov/. There are several largish earthquakes in the world EACH DAY.
viridian
Posted by viridian at 9:47 AM