Welcome to another weekend, and Sunday Stamps #108.   It is a quiet and snowy weekend here in the midwest of the USA, and Summer seems far away.  But this week we will pause and consider one aspect of warmer weather - insects.

Insects are not all bad.  This taxonomic group includes bees and butterflies after all.  And nameless green beetles on what looks like a dandelion flower.

It is JBS Haldane (British geneticist and evolutionary biologist) who is credited with this quote about beetles and God:

"The Creator would appear as endowed with a passion for stars, on the one hand, and for beetles on the other, for the simple reason that there are nearly 300,000 species of beetle known, and perhaps more, as compared with somewhat less than 9,000 species of birds and a little over 10,000 species of mammals. Beetles are actually more numerous than the species of any other insect order. That kind of thing is characteristic of nature."

This is sometimes misquoted as "an inordinate fondess for beetles." 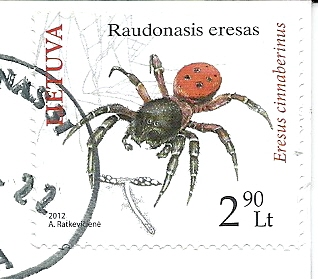 Now here is a spider on a stamp from Lithuania.  There are a number of webpages in Lithuanian on this spider, and trusty Wikipedia comes through,  telling me this is the Ladybird Spider.  The females are larger than the males, and it does not appear to be poisonous.

Please join me this week with a contribution!

Theme next week:  Love, hearts, and flowers, in anticipation of Valentine's Day.

i am not a fan of spiders, so it may be difficult to get through this theme.

I see we both share a fondness for Haldane, I've gone with the apocryphal quote. I like that series of Japanese stamps, so pretty.

I also love the Japanese stamps!
Although I am not a fan of spiders and other creepy-crawlies, I still like to collect them -- on stamps, of course, hahaha.

There is a GB stamp for a Stag Beetle which I would like. It;s on the same set as a Ladybird - not a spider though.

i didnt know there was something as a lady-bird spider...still, it doesnt make spiders more likable to me..i just shudder at the thought of it :)

You are entirely right! And I as a scientist should have known that. They have eight legs and so are in acs different group. Oh we'll, too late to change my post now :-)

i dont mind spiders as long as they dont crawl over me :) i like the stamp! alas i had nothing to contribute with, only some older posts...