It's President's Day in the United States on Monday.  Washington's birthday and Lincoln's birthday have been glommed together (assimilated?) into what's seen now as a day off and a chance to shop some sales.
Let's look at some stamps. 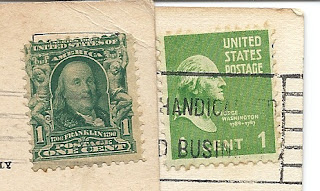 On the left: a penny stamp from 1908, featuring Ben Franklin.  On the right: a penny stamp from 1949, featuring George Washington.  I don't think I need to explain who these two men were, and how important they were to the early United States.
There must be millions of these two stamps out there, many still affixed to vintage postcards.  Thank you, humble green stamps, that helped send these postcards on their way.

Viridian
Theme next week: stamps from the internet age: Zazzle-style stamps (see http://dorincard.blogspot.com/ ), or featuring computers.  Or anything you wish.

I didn't know it would be President's Day tomorrow. I suppose if it's a holiday weekend everyone is out and about, and that would explain why I thought things were quiet.

They used green for 1-cent stamps for a long time. I wonder why they originally chose green.

Thank you for hosting this cool meme! I wish somebody would also host a stamps or postcard meme each day of the week. :)
My blog link is http://dorincard.blogspot.com, while http://dorinco.webs.com is just a website, not a blog.
According to alexa.com traffic-ranking website, 50% of all my blog visits come from UK!!!
Hmmm...:)

Classics! I need to scan some stamps for today's meme!

I've generally ignored the stamps on my postcards. Time to take a look at them I guess.