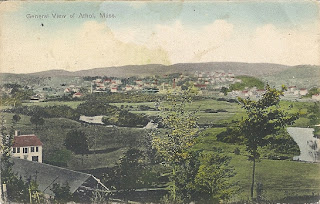 
Athol Massachusetts is located in the north-central part of the state, on the Millers river.
The area was first settled in the early 1700's.  It was named by an early settler who thought the hills reminded him of his  ancestral home of Blair Atholl, Scotland.  (If one can believe Wikipedia).

Mills of all sort were set up along the river. According to Wikipedia, "The Athol Machine Company was established in 1868 in order to manufacture a chopping machine invented by Laroy S. Starrett. In 1881, Mr. Starrett established the L. S. Starrett Company, known for making quality precision tools. The company remains the town’s largest employer to this day, and thus does Athol live up to the nickname “Tool Town.”

The town website is http://www.athol-ma.gov/.  Athol has had some hard times but seems to be rebounding.  Population has increased some, and they were designated a green community. In the late summer and fall there is a series of concerts called "Tool Town Live."
Posted by viridian at 12:22 PM

What an interesting background on this fascinating postcard. I can tell you took a lot of time on this! Thank you!

Pretty card and what an interesting town ... love the idea of tool town live!

What a lovely view! Looks like a nice place to visit. I've found Wikipedia to be quite accurate. A recent study agrees with my assessment.

Looks very green by the river, nice card. I like the sound of Tool Town Live and its venue Fish Park,I'm rather partial to a blues band.
Happy PFF

Beth:
I didn't spend too much time - busy at work1

I'll have to tell my friend Tete about this postcard party-sounds fun-Happy PS-hope you have a great weekend!

I think the hills could well have reminded the settler of Blair Atholl. I like the story anyway. :)