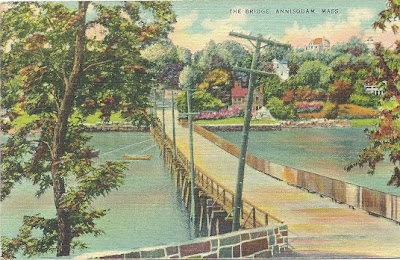 Specifically, The Bridge at Annisquam.
Annisquam is a small town on the North shore of Massachusetts (meaning north of Boston). On the map below, see the position of the little house. 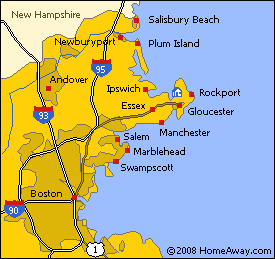 Not much has changed since the time of this linen postcard.  There is much less fishing, and much more summer tourism.  As this town was a backwater, many of its older buildings have survived.
The other place of note is the Annisquam lighthouse. 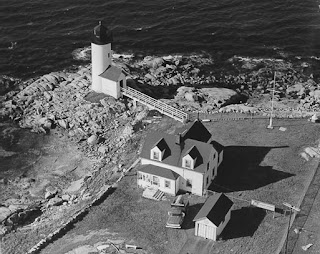 According to this Coast guard webpage,
"* 1801: Annisquam is the oldest of four lighthouses to guard Gloucester peninsula. The keeper’s house, built in 1801 continues to house Coast Guard families. Rudyard Kipling lived there while writing "Captain’s Courageous" – a great literary tribute to American sailors.


I like this linen postcard because it reminds me of lazy days at the beach in Massachusetts.  Warm sun, the smell of flowers, but always a cool breeze from the ocean.

Viridian
Posted by viridian at 2:03 PM

This is a beautiful postcard!

I just love these linen postcards--the colors are so lovely. There is a nostalgic feel to them.

Now this is my idea of heaven!!!! Beautiful card. Happy PFF!

Gorgeous colours! Lucky place, to have been forgotten by progress.

Delightful card and colours. From the map it looks a lovely sheltered place.

I love the old linen postcards... and interesting little old towns. Happy PFF thanks for sharing!

I love the idea that families still live in the old lighthouse keepers place. Great card.

Lovely postcard - linens are my favorite - and interesting history!

Very idyllic scene. I like the way you evoke summer days in your last line! Beach days are the best. Happy PFF.

I'm with Irene. To live in a house built in 1801. Wow. Nice history on the lighthouse too. One can learn so much from postcards.

Did you review the layout of your blog? It looks beautiful, and I love the "watermarks" in the background. Interesting post as well.