Thank you to our hostess Beth at The Best Hearts are Crunchy for hosting Postcard Friendship Friday.


For the next few National Park postcards, we are going to take a tour of the American West, as if you had plenty of time, money, and a good car. Today it’s north to Glacier National Park, then looping west to Washington and California, and ending up at the Grand Canyon.

Giving credit where credit is due:
The back of this card says:"Works Progress Administration (WPA) circa 1939, Artist Unknown. Between 1935 and 1943 the WPA's Federal Art Project printed over two million posters in 35,000 different designs to stir the public's imagination for education, theater, health, safety, and travel. Due to their fragile nature only two thousand posters have survived. The National Park image shown here is also available in the original poster format from many National Park bookstores." Published by Ranger Doug Enterprises. Seattle, WA.
Glacier National Park was designated our nation's 10th national park on May 11, 1910. (It’s their centennial!)

“By the late 1800s, influential leaders like George Bird Grinnell, pushed for the creation of a national park. In 1910, after 15 years of negotiations and debates, Grinnell and others saw their efforts rewarded when President Taft signed the bill establishing Glacier as the country’s 10th national park.”
Glacier National Park is in the extreme Northwest of the state of Montana.

Waterton Lakes National Park (see map below) in Canada borders the park, preserving many square miles of pristine wilderness. You can even take a beautiful boat ride on Upper Waterton Lake and pass from one country into another (no fences!) – this area is also an International Peace Park , a UNESCO World Heritage Site, and a Biosphere Reserve. Even with all this, you can get to this park by public transportation. Amtrak trains run to East and West Glacier, and there are shuttles to locations in the park.

Below: Photo collage from the Glacier website. The photo in the lower left corner should look familiar! 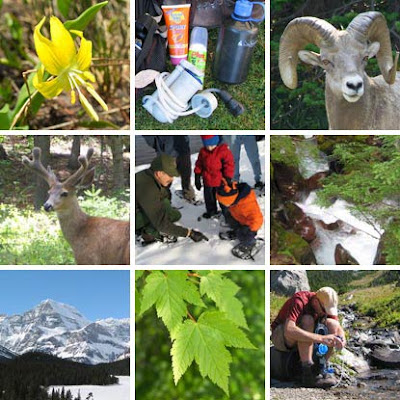 The rocks here are sedimentary, made of sediments deposited in long-ago seas.
The geology, from the park's web page:
"A mountain-building episode, known as the Laramide Orogeny, affected the Rocky mountains upward from Alaska to Mexico. The force of this pressure folded and uplifted rocks, and in the case of the Lewis Overthrust, pushed a giant slab of older (precambrian) Belt series rock (50 miles by 200 miles) over much younger Cretaceous Era formations. The pressure of colliding plates raised the land to great heights, well above the glacially-carved peaks remaining in the park. Glacial scouring and erosion has diminished the size of Glacier's mountains over time. Mt. Cleveland is the park's tallest peak, listed at 10,466 feet, and more than one hundred other summits rise above 8,000 feet. . . . The shapes of Glacier's peaks were carved relatively recently. Visible to the observer today are stunning amphitheater-like cirque basins and broad U-shaped valleys, formed initially through glacial activity dating to the last ice age, and knife-edged aretes and pyramid-shaped peaks shaped by more recent erosional forces."
The glaciers of Glacier National Park are quickly melting away. Not on a geological time scale, but in our lifetimes. The following two pictures of Grinnell Glacier were taken first, in 1940: 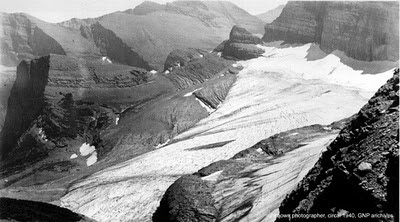 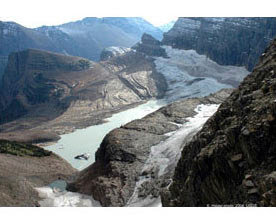 These two photos are from this article on Live Science. It is depressing, but instructive, to click through all the photo pairs.
viridian

Wonderful post (as usual). Mr. Dragon and I have both enjoyed your WPA Poster/Postcards. Keep 'em coming! Happy PFF!

a wonderful post and commentary as always...i look forward to this parks posters on PFF! i used to live in the foothills of the sibillini mountains in italy - they too were formed by glaciers and traces are still clearly visible today in the form of glacier circles...you've made me want to get my hiking boots on!

Glacier Park is celebrating its Centennial this year!

I went on a tour to Glacier Park in 1985 and am still planning to go back "some day." It seems funny, but I don't remember the glaciers. What I remember best are the red jammers and vintage lodges.

Never been to Glacier National Park, Viridian! It's beautiful! :)

Can't wait for this series - I'm glad it made me look back to last week's as I have been to Jenny Lake more than once, even fished in it for trout, and was happy to see so many beautiful pics/postcards from there.

I wish and had your talent for writing. Your entries are so full of information. Its been quite a few years since I have been to Glacier. Thanks for visiting my blog. I am not sure if that bear is Yogi. Was he around 50 years ago?
Judy

Hi... thanks for leaving your link in my blog. It's already been added in my blog list :)