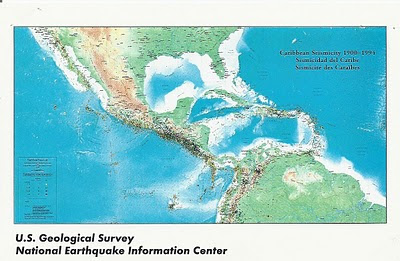 Marie, the French Fractrice, has "Booger Hollow, Arkansans" on her blog for this week's Postcard Friendship Friday, but I picked this one out ahead of time.
An over sized postcard published by the US Geological Survey, it shows the Caribbean and surrounding areas and plotted in tiny dots (even on the original) are the locations or epicenters of 94 years of earthquakes. Coloring of the land indicates height above sea level (green: low elevation; browns: getting higher), and different shades of blue indicate ocean depths. (Pale color: less than 100 meters, deeper blues for deeper depths). The average ocean floor in the Atlantic and Pacific oceans is over 3 miles deep!
There are a number of plate tectonic boundaries in the Caribbean and one does veer right through Haiti. A 7.0 magnitude quake is a major one and in such a poor country..... This area is going to be suffering for years to come. I worry about 6 months from now, when the hurricanes start arriving.
The USGS has prepared a poster on the 7.0 Haiti earthquake. You can print out a large copy if you have access to a large-format printer, or you can print a smaller size. the link is http://earthquake.usgs.gov/earthquakes/eqarchives/poster/2010/20100112.php
One person has asked where I find all these postcards. Well, let's just say that if you go to conferences where the state surveys have a booth and they have promotional postcards.... you can build a great collection.
I have two more state geology postcards, for later weeks. Take care!
Viridian
Posted by viridian at 9:49 PM

That's a lot of earthquakes!

I didn't realize until the recent earthquake in Haiti that the Caribbean had earthquakes, too. We've had two relatively small ones here in Northern California in the last month. Small, but enough to make you stop what you're doing and wonder what if this is the big one!

That is a tremendously scary postcard!

Wow! Amazing -- so up to date. Happy PFF

Thanks for the lesson... I can't wait to see more of your postcards! And thanks for stopping by my blog:)

Sad that it's so very topical. And another black dot to add to the picture.

Wow... Mexico's west shore is covered in dots! Looks like Haiti was on a time bomb!! Thanks for sharing, thanks for stopping by my blog! PFF

It always seems to me that these earthquakes are such a surprise to everyone, but according to your postcard this is not so. Amazing what we know and yet what can we do about it. HPFF

Wow, almost 100 years of data. Looks like the Americas have been trying to split apart for some time!

My boyfriend calls me the phantom news watcher because I literally sit in front of the TV to watch the evening news with a blanket on my head... Great post!

I have linked your blog in mine: http://shaunnaf.blogspot.com/2010/02/postcard-links.html
Have a great day!