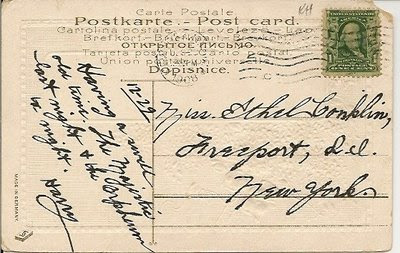 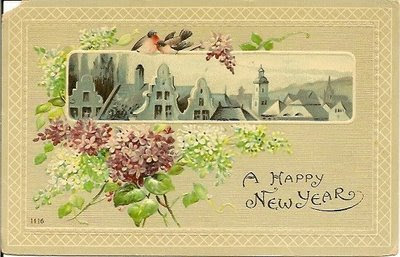 Postcard addressed to Miss Ethel Conklin, Freeport, Long Island, New York. Dated 12-29-1908.
"Having a swell old time. The Majestic last night & the Orpheum tonight. Harry" (in fountain pen)
What a party boy! Is this addressed to his sister or his maiden aunt? The Majestic Harry refers to is the old Majestic at Broadway and 59th, at Columbus Circle. (I just love Google - and I love the dedicated people who keep up web pages about every topic imaginable.)
Even better: John Kenrick has a web site where he has compiled the book musicals that have played Broadway over the years (I think this means not vaudeville shows). So I can tell you that Harry probably went to see "The Pied Piper", which opened December 3 that year. Probably wearing tails or at least a tuxedo.
I can find less information about the Orpheum. The current Orpheum is on Second Ave. (STOMP is playing there now) but I can't easily find info on its history. Maybe this is where Harry was going.
Party on, dudes!
PS. The days when you could send a postcard to Freeport with just the recipient's name are long over - Freeport is now a huge suburb on Long Island.
Viridian
Posted by viridian at 9:00 AM

Oh good heavens. The age of grandeur and glamour, long gone. How beautiful the card and how wonderful to think about the event.
I often dream about attending such theatrical shows of the past. I'm always looking so Audrey Hepburn like in these dreams and then I wake up to cold cream on my face.