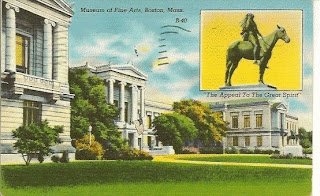 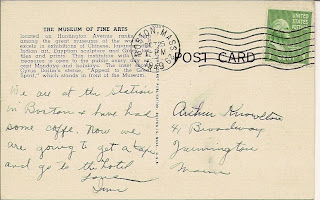 One of the postcard blogs I follow pointed out that in the past, people sent postcards the way we send instant messages or twitter updates. (I wish I could remember which blog - I would link to you.) The heyday of sending postcards - lots of postcards - was early in the 1900's, but here is an example from October 25, 1949:
to Arthur Knowlton, Farmington, Maine.
"We are at the station in Boston & have had some coffe. [sic] Now we are going to get a taxi and go to the hotel. Love, Irma."
Would that fit into a tweet? I don't use twitter so I know there's a limit on characters, but not what the limit is.
Irma (who is traveling with her?) could be writing from either North Station or South Station in Boston. If she was writing home, then it would be North Station. The Mass. Highway Dept. has a great photo taken within months of her postcard. Think of the haze and dirt from the coal-fired steam locomotives.
Did I mention I love Google, and finding information and images so easily?
Posted by viridian at 9:56 AM

great postcard. thanks for sharing. i really enjoy your blog..just found it recently and it is delightful to visit.