Hello from the cold American Midwest and welcome to my contribution to Sunday Stamps.
This week's theme is Winter white.  It's hard to find a mostly white stamp, so instead I have chosen a set of US recent stamps, featuring snow and winter birds. 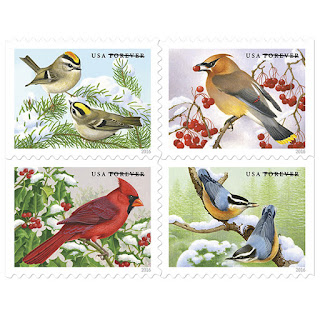 According to the US Postal Service:
"The Songbirds in Snow stamps each features one of four birds: the golden-crowned kinglet, the cedar waxwing, the northern cardinal, and the red-breasted nuthatch. Illustrator Robert Giusti painted the original designs in acrylic on canvas board, depicting each bird perched on a snow-covered branch. He and the art director chose these four birds for their color, attractiveness, and adaptability to the small format of a postage stamp.

The cedar waxwing (Bombycilla cedrorum) gets its name from its favorite winter food, cedar berries, and the red, waxy tips of some of its wing feathers. One of the few North American birds that thrives on a diet of mostly fruits, the cedar waxwing also consumes the winter fruits of juniper, mistletoe, and crabapple.

A spot of bright red against the white of a snowy tree branch signals the presence of a northern cardinal (Cardinalis cardinalis), one of winter’s most colorful and beautiful birds. Cardinals usually appear in pairs but can gather in small flocks during the winter to forage for food.

The red-breasted nuthatch (Sitta canadensis), with its distinctive call like a tiny toy horn, prepares well for the season by caching conifer seeds, its preferred winter food. Stashed in cracks and openings in tree bark, the seeds are collected by the bird as it walks headfirst down the trunk."

I like that they have included the cedar waxwing, my favorite bird.

Please visit  See It on a Postcard to see who else is playing!

I received three of them on an envelope. They are very beautiful illustrations, thanks for sharing them!

I love this set - I used these beautiful stamps on my Christmas mail. And how lovely that your favorite bird was featured.

Oh, this is a surprising choice! Lovely birds, accompanied indeed by winter white! Thank you for sharing!

I'm a fan of song birds and not just on stamps. I obtained this set when I was in the uSA last year.