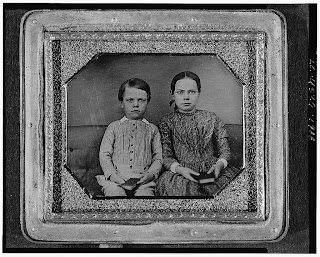 Ooh, the little boy seems to be in a bit of a mood.

Good choice. Not sure the boy thinks so!

Its a wonder that he sat still for so long, good job big sister is there.

Actually, neither one of these two children looks too happy. I love being able to see the details of the children's clothing. The boy's suit is particularly interesting.

The children look a little stunned, poor souls. And I don't believe the books were light reading either.

I love the overall color and look of the photo and its frame.

There are so many great on-line archives of old images out there that it is great that you can point our attention towards fascinating ones such as this.

Can't decide whether the 2 children are unhappy, bored or just plain terrified.

Great old photo. We're so fortunate to have access to these online archives.

The little boy looks like he is trying very hard not to blink. His sister is taking it a bit more in her stride through. That's an interesting decorative frame. Jo (at imagespast.wordpress.com, I'm having trouble commenting on Blogger posts with my Wordpress ID)

I like how she is leaning in towards her little brother a bit, as if giving a bit of support. The intense looks on both faces just goes to show you ... kids haven't changed much as portrait studios do NOT bring out their best! ha.