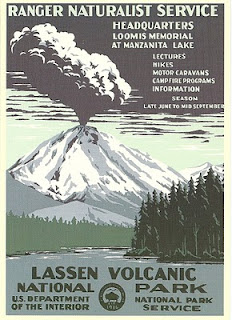 Thank you to our hostess Beth at The Best Hearts are Crunchy for hosting Postcard Friendship Friday.
Giving credit where credit is due:

The back of this card says:"Works Progress Administration (WPA) circa 1939, Artist Unknown. Between 1935 and 1943 the WPA's Federal Art Project printed over two million posters in 35,000 different designs to stir the public's imagination for education, theater, health, safety, and travel. Due to their fragile nature only two thousand posters have survived. The National Park image shown here is also available in the original poster format from many National Park bookstores." Published by Ranger Doug Enterprises. Seattle, WA.

From the Lassen Park website: “On May 22, 1915, an explosive eruption at Lassen Peak, the southernmost active volcano in the Cascade Range, devastated nearby areas and rained volcanic ash as far away as 200 miles to the east. This explosion was the most powerful in a 1914-17 series of eruptions that were the most recent to occur in the Cascades prior to the 1980 eruption of Mt. St. Helens. Lassen Peak is the largest of a group of more than 30 volcanic domes erupted over the past 300,000 years in Lassen Volcanic National Park.” 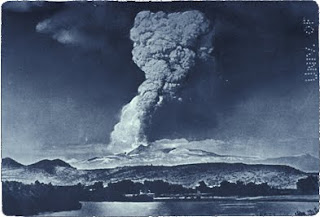 Photo of the 1915 eruption
So you can see why this poster has an erupting volcano!  I'd find it a little scary myself, and maybe choose another place to go. Don't worry, the Lassen area is being actively monitored by the US Geological Survey.
Lassen Park covers part of Shasta and Lassen Counties in Northern California.

Loomis Museum is still there, and is a major visitor's center.  it is open May 28 - October 31, 2010. Some roads in Lassen are still closed right now because of snow!!  From the park website: "B.F. Loomis documented Lassen Peak's most recent eruption cycle and promoted the park's establishment. He photographed the eruptions, explored geologically, and developed an extensive museum collection. Artifacts and photographs of the 1914-1915 eruption are on display in the Loomis Museum. New exhibits feature the original equipment Loomis used to photograph the eruptions and traditional Atsugewi basketry."


I've decided to have a giveaway!  Please check my blog within the week for a post on this.  I'll be giving away this set of WPA poster postcards to one lucky winner.

Hi! Thanks for pointing out my typo. (gasp)

And also, thank you for posting these wonderful postcards--I find the photo of the volcanic eruption especially fascinating.

I was near enough to Mt. Helens when she blew her top in 1980--it looked a lot like this postcard!

Again a fascinating card. I'n ging to California this Summer and will check out this park. Greetings from Amsterdam and Happy PFF.

i love this card...i think this one may well be my favourite of the entire set! i'll be keeping my eyes peeled for the give-away! happy PFF!

I visited Lassen Park for the first time two years ago. What a wonderful place. I couldn't believe I had waited so long to check it out.

You already know how I feel about these cards!!! Delightful. I had no idea there was such a place as Lassen Volcanic National Park. I learned something new today! Happy PFF!

I feel so remote from all these volcanoes and yet we all know now they have a global effect. There is a volcano park in France but the volcanoes themselves are extinct, or as extinct as they get....

viridian, thanks for all these national park postcards! They are all so different! Happy Postcard Friendship Friday! :)

Viridian: This series of park cards is great. The volcanic stuff is incredible from the mud pots and geysers in Yellowstone National Park to the Lava Tubes outside of Bend, OR and Lava Bed National Monument (including "glass mountain - a huge mountain of obsidian outside of Mt. Shasta, CA). Thanks for the wonderful series of cards, and the volcanic reminder!

I have seen this as a poster somewhere before! It is very familiar! It's one of my favorites from this series.

I also got to watch the May 1980 eruption of Mt. St. Helens from the hill behind my house - it really did resemble the photo of the Mt. Lassen eruption!

That's a park I hadn't heard of and I didn't realize that there are so many volcanoes in this country.

This is one I haven't seen before, it is very dramatic. Snow now?! Good Grief. Happy PFF.

The movie "The Road", with Viggo, was filmed also near Mt.St.Helens. Amazing aftermath.
Best wishes to you! :)