Happy PFF - History in a postcard 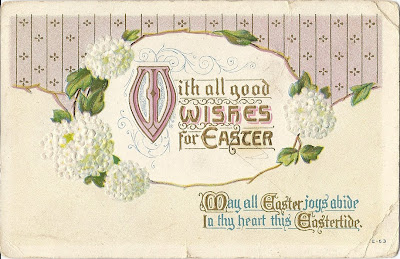 To Mrs. Harry Sommerfeld, Lohrville Iowa (rural route)
Postmarked Long ? April 9 1917
Dear Lillie:
How are you? I am just fine. Nearly every-body is done with the vats(?) Had a snow Sat. afternoon and a big freeze the last two nights. What do you think of the war? Looks very serious. People are all worked up about it around here. Did you start some goose berries plants for us. If you did send by parcel post and will pay you the postage. Corn was 1.18 Sat. eggs 20p. Good stuff is taking a jump. Ans .soon Rita 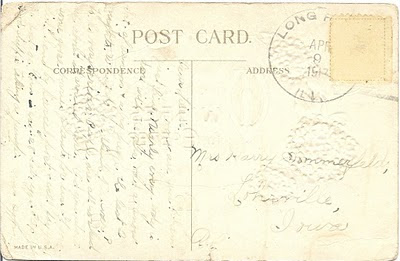 I knew from the postmark that Rita was talking about WWI – the Great War. After doing some research (OK, just Wikipedia) I realized there was much about the war I did not know. And the date of this card will be significant.
Many socio-political events contributed to the war, though the assassination of Archduke Franz Ferdinand in July 1914 is considered to be the trigger. Various alliances were invoked so soon “The conflict opened with the German invasion of Belgium, Luxembourg and France; the Austro-Hungarian invasion of Serbia and a Russian attack against Prussia." http://en.wikipedia.org/wiki/World_War_I
Later the Ottoman Empire, Italy, and Romania joined the war. In March 1917 the Tsar abdicated and a provisional government continued with the war. Conditions in Russia were chaotic.
The United States followed an isolationist policy. However there were some cases of suspected German sabotage in the USA. There were increasing U-boat attacks on shipping. And then there was the Zimmermann telegram. Gosh, I must have been asleep that day in history class. Or they skipped right over it.
In January 1917 “British cryptographers deciphered a telegram from German Foreign Minister Arthur Zimmermann to the German Minister to Mexico, von Eckhardt, offering United States territory [Texas, New Mexico, Arizona] to Mexico in return for joining the German cause. This message helped draw the United States into the war and thus changed the course of history.” (http://www.archives.gov/education/lessons/zimmermann/). 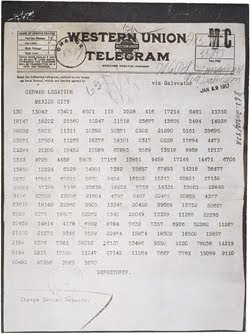 However, the Brits waited until February to tell President Wilson, and news didn’t hit the papers until March 1 1917. Public outrage ensued.

On April 6, 1917, the United States Congress formally declared war on Germany and its allies. No wonder the talk was all about the war among Rita’s friends and neighbors.

Another note about April 1917. Lenin at that time was in Zurich, Switzerland, but with the abdication of the Tsar, he had decided to return to Russia. But how, with the Great War raging all through Europe? Therefore the sealed train, traveling through Germany to the Finland Station in Petrograd (once Leningrad, now St. Petersburg). And so, after a number of events, the October Revolution that year and changing history, again.

And as in my postcard that mentions the Berlin Wall, the mundane is intertwined with the historical. Rita asks about gooseberry plants, and gives an update on farm prices.

I am joining Beth at The Best Hearts are Crunchy for Postcard Friendship Friday. Please see who else is joining her today.

What an interesting post! I wonder what those vats are! The only thing that comes to mind is lard. It was an important store item those days, but worth mentioning? Gooseberrys are a rare find these days.

A sweet card but with a worried message. a bit strange to read that also in times of war people keep on eating, working, loving and writing postcards about gooseberries. Happy PFF.

Great card & interesting post! I like how the sender included the price of groceries. I had to interview my grandparents about life during the depression once for school. My grandmother could still tell me the price of food items from back then! I was fascinated by them!

Looks as though they were having similar weather to this year in April.
I like the contrasting themes in the message. Made me wonder about food production during WW1 the way Rita says the good stuff is taking a jump. Great how old cards give you a journey into history.

That's an interesting post. I never heard of the Zimmerman telegram before.

It seems so strange to have something as normal as food in the same message as WWI. But, why send 2 messages when you only need one?
Happy PFF!

I love cards like this one, when you have an insight into real life at the time. Fascinating.

What an incredibly fascinating post! And I love the personal touch of the postcard.

My Grandfather was in WW1, my Dad was in WW2. My uncle Joe was in Vietnam and my Uncle Kelly was in the Korean war...My brother-in-law was in Desert storm and my nephew is in the special forces guarding the state capitol.

These great even ts do touch all our lives, don't they?

terrific history, thanks for posting this.

One minute she is mentioning the war, the other the berries. Very interesting.
Judy