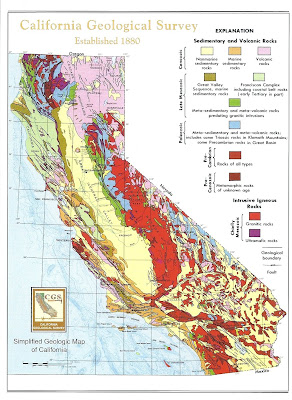 A simplified Geologic Map of California, from the California Geological Survey, established 1880. Oversized postcard, 5 by 7 inches.
Red areas are intrusive granitic rocks, mostly Mesozoic in age. They hold up the great mountain ranges of CA including the Sierra Nevada and the Yosemite area, the Peninsular Ranges and the San Gabriels north of L.A. In the theme of Christmas, the dark green rocks are older metamorphic rocks, and the swath of yellow is the Great Central Valley, covered with recent sedimentary rocks. The lighter green areas closer to the coast are part of the Franciscan Complex, rocks of rather high pressure metamorphism that went down a subduction zone, came back up, and got stuck here because of the San Andreas Fault.

Here is a state with a lot of geology, and taxpayers who don't mind paying for the Geological Survey. Er, except maybe now, as CA is nearly out of money. As they note: "The CGS staff is dedicated to the fulfillment of our stated mission of providing information and advice to protect life and property from natural hazards and to promote a better understanding of California's diverse geologic environment" BUT "All CGS offices will be closed the first 3 Fridays of every month due to the furlough program mandated by the Governor."

Gold was discovered in the Sierra Nevada Mountains, starting the Gold Rush of 1849 - 1850. California has many other natural resources.
California has the major plate tectonic boundary of the San Andreas fault, and other minor faults. And plenty of earthquakes. How many?

Note that there are 638 earthquakes on this map, and all happened in the last week (!). Most were very small, and detected only by seismometers. The USGS and the CA Geological Survey spend a lot of time and effort on earthquake preparedness. This includes tsunami warning systems.

It's hard to believe it's been 20 years since the 1989 Loma Prieta quake, which stopped game 3 of the World Series.
Other San Andreas links:
Carrizo Plain National Monument
Wallace Creek area guide
Hayward fault: Slow fault creep in Hollister
National Parks and seashores in CA:
Death Valley
Yosemite
Point Reyes
Muir Woods
All of which I want to visit, some for the second or third time.
Viridian
Posted by viridian at 8:14 PM

was that big quake 20 years ago... I lived in Calif as a girl and I remember our drills drop and cover!! PFF and TFS

I feel old now:) I lived in CA as a girl too and certainly remember this quake. I was alone at home... I dashed under a table.. It was the longest and scariest few seconds of my life! Happy PFF!

I didn't realize they had so many small earthquakes.

So many fault lines! I suppose it's no wonder there are all those earthquakes showing up, but I'm still amazed.

I do remember the Loma Prieta quake -- we had just been to San Francisco a couple of weeks before and boy, were we glad to be home. Happy PFF

I wonder how much gold is still in those CA hills.

I was in that earthquake, in San Francisco, and it was big. We had a bunch of people spend the night on our couches, as one of the bridges was badly damaged, and they couldn't get home. Good thing California is so beautiful - otherwise - the earthquakes would make it a bit scary to live here.

I was there for the Loma Prieta too. I remember it well.